Robert Redmond: Right, and that’s one of the main things as a business coach that I really try to emphasize is bringing that concept of the boom. Big, overwhelming, optimistic, momentum. Energy, enthusiasm, and I remember, Clay, I sat in a Elephant in the Room sales training, and I’ll never forget this. You went over the meaning of enthusiasm and you broke it down, you went back to the Greek root words. It sounded like something you might have learned in college, but do you want to explain that? 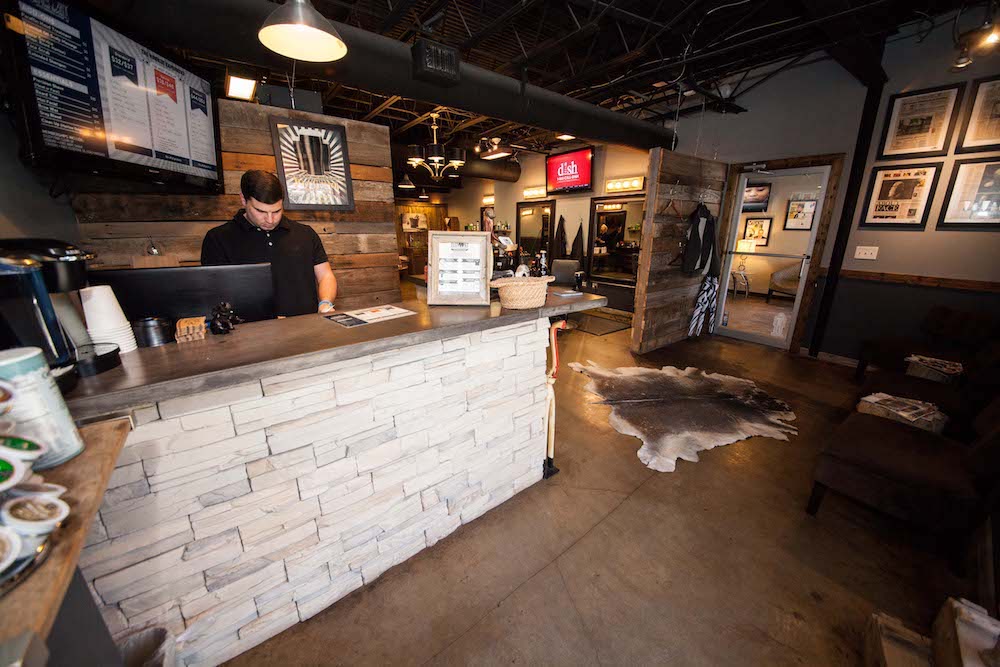 Clay Clark: Even though I look dumb, I do love to study the origin of words. And so, the Greek is where that comes from, but the word enthusiasm comes from the Greek word theos. So, theos means god, and so, enthusiasm means god within. So, in the literal, it means god within. So, the idea was that if god is within you, how would you sound. And so I hear a lot of people, they say … I mean, this is example, I talked to one guy recently who said, “Clay, I’d love it if you’d invest in my business.” I said, “What is your business?” He goes, “Well, we’re kind of … we kinda sorta, um, are going to do something, I think might work.” And I go, “Hey, hey, hey, whoa, whoa, whoa. Time out, I want to give you a little business coach one on one coaching moment. Whether I invest in your company or not, kinda sorta are going to do something that might do … I don’t want to, I’m not interested. You need to be 100% confident that your idea is awesome sauce, it’s going to work, and you’re not going to stop until it does work because if you don’t have that kind of energy and passion for your business, I certainly will not. So, you got to have that enthusiasm.” And so, Mel, I want to ask you, you’ve done wedding photography for a long time, right?

Clay Clark: And you’re doing like a bridal shoot let’s say, okay? Or you know so it’s the bride … or let’s do like an engagement. So, it’s the groom to be and the bride to be, right?

Clay Clark: And if … have you ever seen when you were maybe first learning the dark arts of wedding photography, have you ever been to a shoot where the lead photographer didn’t bring enthusiasm and it was kind of awkward, you know?

Clay Clark: How awkward is it? So explain the awkwardness, what happens when there’s not an energetic person leading the engagement photos?

Clay Clark: Having built with one of the most successful wedding photography companies on the planet called Epic Photography before I sold it, I can tell you I used to go out sometimes to shoot for building the business and knowing nothing about photography and I always got the best photos with the people just because I had fun. I said, “All right, so you, sir, I’m going to have you stand next to her, and sir, can you kind of snuggle in there? Oh, yeah, yeah. Oh, look at … oh, beautiful, beautiful. Pssh.” And then we were taking photos when I’m just going … and the photographer’s taking photos, but I’m just talking to him, “Oh, that looks good. Sir, that looks too good.” Now, imagine you’re being chased by a bear. And he’s like, “What?” And then I get that facial expression. Now, imagine that you’re so in love, but your mom just walked in on you being so in love, if you know what I’m saying. And they’re like all these crazy faces, and they’re going to laugh when they’re having a good time. Pretty soon, the photos capture their personality, it’s photo journalistic, they look great. That is a principle that I’m sharing with you as a business coach. You must bring high energy and overwhelming optimism.

Melena Wright: You need to have fun, you need to remember why you’re doing what you do and have fun with it. And you’re working with people so, you know, they don’t have to be strangers. You can kind of get to know them and show them your personality and have a little fun with them and then they relax also and have a good time at their photo shoot.

Clay Clark: Now, Megan, your business is dependent on selling things to customers, right? Out there at Beau and Arrow. I mean, you sell products to women. Why do you have to be, if not like over the top enthusiastic, but why do the people that work there have to seem like they have a genuine interest in the customer’s needs and goals, that kind of thing.

Megan: Well, first off, I’d say the customer probably would walk straight out if they didn’t, but I think it’s really important to just put on a friendly face and make the customer feel like they are the most important person, thing in the shop at that moment, which they are. It’s dependent upon the sales of the company, and you want them to feel comfortable and to not feel like they’re going to be judged for anything that they try on. Or if something doesn’t fit right that, you know, it’s not a big deal, that we’re not judging them and they should feel comfortable.

Clay Clark: Here’s another business coach tip from my proven path of business coaching systems: I will just tell you at our Elephant in the Room men’s grooming lounge, we now have close to 80 humans who work there. It’s getting bigger. I go into these trainings and business coach meetings, I used to go, “It’s cool if the people aren’t doing a good job, I could fight them and win.” You know because there’s only like four of them and I feel like I’m sort of a wiry guy, you know. And then there’s like five, I’m like, “I could still take these five people.” And then there’s six, I’m like, “I could like ninja fighting, pshh, pshh, pshh.” You know, seven I could do like some Chuck Norris crane kicks. Eight, I could do some … then there’s like 80 of them, and I’m going, “Oh, no.” And so I can’t lose control. We’ve got to have an awesome group of people, but I’m telling you we have the most enthusiastic staff we’ve ever had. We’re so intentional about hiring people who really are happy people. This is a business coaching fact and you have to trust me when I tell you as a certified business coach… These are the details that really matter.  I’m telling you what, if you’re struggling to find a job out there, apply at EITRlounge.com if you’re a shiny, happy person, we’ll hire you. Stay tuned, we’re getting back into the mail bag. Thrivetimeshow.com.

All right, Thrive nation, welcome back into the conversation. It’s the Thrivetime show on your radio. We’re coming into a little bit of OneRepublic here off their new album “Oh My My”. Ryan Tedder, he’s a Tulsan, he’s a Grammy Award winner, he’s writing songs for Beyonce, Adele, what? Bono, he’s writing songs for U2, are you kidding me? Oh, yeah. Big guy, I’m telling you what, he is a guru. He’s writing songs for Jennifer Lopez, which involves basically compensating for somebody who cannot sing. I mean, this guy’s got super talent, okay? So, Ryan Tenor is an unbelievable … he’s kind of a Tulsa living legend here. He went to Oral Roberts University, I used to know the guy back in college there when I was working hard as an entrepreneur and dreaming about one day being a business coach.  He sang at our wedding. And so, I’m going to play an all OneRepublic line up today. Every song coming in and out is going to be all OneRepublic. And Robert, we’re talking about these mail bag questions. Kind of reset the question. What was the question that the Thriver asked out there? Was it Dublin, Ohio?

Robert Redmond: Dublin, Ohio. Working with an awesome client, a Thriver, a Coffman Media digital science solution provider. And they’re bringing in a new hire, going to help them out with their sales, and we’re running the five step hiring system, and one of the steps is shadowing. And we’re getting … and in our last coaching session, we were talking and they were asking me, “Hey, what are the most important things that I should be looking out for when I bring in a potential candidate to hire?”

Clay Clark: And Jack Welch, the former CEO of GE would encourage you that there’s four E’s. You have to hire people who are energetic, they bring energy to work. Two, people who can energize others. Three, people who can execute, they can get stuff done. And four, people who have edge, meaning they can make the tough calls. So, let’s talk about the next one here which is energize. You’ve got to be able to pump everybody else up. You got to pump the people up, you’ve got to get excited, you got to get everybody all excited about the work. Because, you know, a lot of times, you get to work and people are like, “Oh, my gosh, my weekend was so terrible.” That’s one of my pet peeves. Mel, I can tell you this now you no longer work with Epic Photography. One of my biggest pet peeves would be like, “Oh, my gosh, my day … my weekend was so hard. I was doing weddings all weekend.” You know what I mean? Because it’s like a down energy.

And as the owner, you feel like this need to like pump the energy up, and now that you’re self employed and doing your own thing, you know, have you noticed that there’s very few people calling you on Monday trying to pump you up? I mean, now that you’re self employed, are there people calling you going, “Mel, you’ve got to pump it up, you got to bring it. You got to make it happen.” I mean, have you noticed that as a self employed person, you have to be able to self motivate?

Melena Wright: I have noticed, yes, the lack of like motivational words coming at me since I left. And now that I’m on my own, I think about you know all the business coaching I’ve had from you, and it’s been carrying me through because I need that motivation and encouragement from a business coach for sure.

Clay Clark: Now, I will tell you this, if you’re struggling right now to find a source of motivation or someone who can energize you, you’re not an idiot. Check it out. Before I energize the members of our team, I have to energize myself every day. What? Yeah, so I have this move I do … moves I do. One is I listen to T.D. Jakes in the shower all the time. You’re like, “I don’t ever want to think about you in a shower at all, you sick freak.” Fine. But that’s what I do. So, T.D. Jakes, I mean, he’s a unbelievable, inspirational speaker. And I’m just telling you what, I have to business coach myself.  I have to get myself excited. So, this is how I tell people, if you can imagine like a rubber band … Robert, can you imagine a rubber band, okay?