Business Coach Can Make All Okay

Clay: All right, all right and all right. Welcome back to the Thrive Time Show on your radio. My name is business coach Clay Clark and it is my pleasure to be here with you. I know that you are some of the mental elites amongst us. You are the kind of person who’s decided that you’re going to have success in your life. You’re not gonna let life happen to you. You’re going to ordain your destiny, you’re going to achieve success, and you’re gonna do what it takes. And so inside the box that rocks today, I feel like I’m almost like a babysitter of sorts today. We have two very successful entrepreneurs inside the box that rocks. Both of which were basically just driving ninety-five miles an hour to get here on time, or a little bit thereafter. And so Steve, what was your reason? You pulled up in your Lamborghini just a little bit on time. Just right near the precipice, near the pinnacle, near the almost not on time zone. What were you doing? What were you doing here before noon? What was going on there at TLC Mortgage? 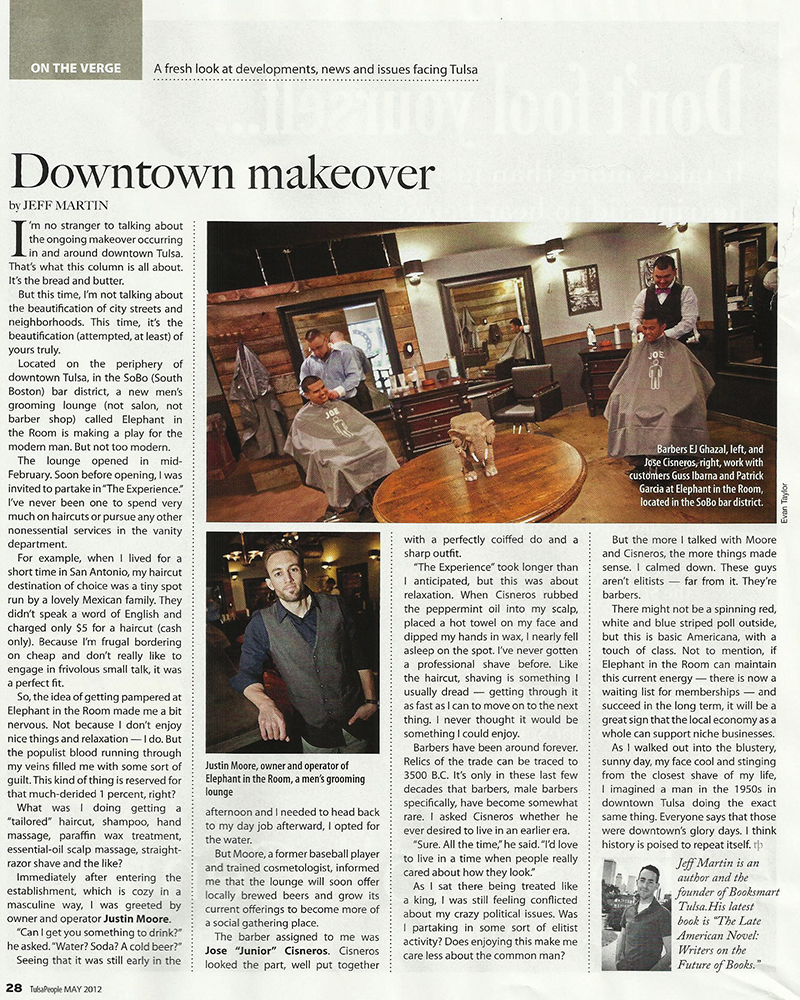 Clay: But being honest with you, being frank, with all due respect –

Clay: With all due respect –

Steve: Right before you slam me? Is that what you’re going to say?

Steve: I wanted to have money left over so I’d say twenty-five.

Clay: Okay. Boom. Now, we have Justin Morgan here. He’s on the show. He’s actually the founder, the visionary behind the Elephant in the Room men’s grooming lounge. Now Justin, what were you doing that caused you to be here right in the nick of time? I mean, you had to drive super fast in your big big truck. What was going on down to the wire there, as your business coach I want to know?

Justin: Yeah, so, once again, when you have multiple shops you have a bunch of things going and the day just throws you its to-do list. And you’ve got to put things on hold. So, we were actually supplying all the shops with this coming month’s beer. So each month we have a new beer, we actually have three beers at each shop. And so this month we were getting it out to all the members that we have out there at EITR.

Clay: Okay. Here’s the science of it. What happens is, the human brain can be manipulated, can be coerced, can be coached, whatever, to make … When you’re doing sales, you can almost make people feel the way you want them to feel if you understand this thing called the deal-wheel. Steve? The deal wheel?

Clay: So what you do is when someone says “No”, we’re tempted to say “Yeah, but, I can do this”. And if you do that, you’re done talking. The conversation’s over. But, if you say (sucks in air). You see? You suck in air. You want to suck in air. And it’s like you have a dog … One time, I stayed at my aunt Karen’s house, this is Justin’s aunt Karen, this would be my second-cousin aunt Karen sort of thing. But I’m staying at her house, you know, and when you’re walking down the stairs in the middle of the night, you can’t sleep, you’re looking for some water. And you kind of accidentally bump something that falls, maybe it breaks, maybe it doesn’t. You immediately go (sucks in air). And everyone’s like “What did you do? Oh my gosh! What did you do? It’s two in the morning! What are you doing?” You know, then you (sucks in air).

So the first thing is, that sound, like you’ve stepped on a small animal, like you feel regret. And then you say, “I could totally appreciate your concern. Let me ask you, what do you mean by that?” So Steve, let’s go into the mortgage game okay?

Clay: So I tell you, okay? Or I guess in this case, you’re the customer, okay? And you can tell me that the rate’s too high. Just go and introduce this objection and let’s see how I deal. Are you ready to go?

Steve: Is that your rate?

Clay: (Sucks in air). Yeah, I mean, this is the rate right now. What’s your main concern by that?

Justin: Lots of people say that, though. That’s what I’m like. “What did you think it was gonna be?” “Zero”.

Clay: But what you do is you always wanna go (sucks in air). “Let me ask you, what do you mean by that?” You always want to sort of deal with that objection. Now, after you’ve dealt with the objection, then you want to say, “Okay so what you’re saying is” … So let’s just pretend … Let’s role play that again. Again, you’re kind of frustrated about the rate. I’m gonna ask you a leading question, and then kind of play with me but pretend that you’re going to answer the question the way I want you to. ‘Cause this happens about 75% of the time. You are a strong minded wizard, but 75% of people would do it this way.

Steve: I won’t try to trip you up as a business coach legend.

Clay: Okay, so here we go. Yeah, so Steve, when you look at the current today, it’s going to be 4.2%. So I just wanted to figure out what date you wanted to close.

Steve: Well, that’s really up to my wife. She’s got all the moving-things planned and all that stuff. I just want to make sure that I’m getting the most competitive rate available.

Clay: (Sucks in air). When you say competitive rate, what exactly do you mean by that?

Steve: Well, I don’t want to pay more than I should.

Clay: Okay. Well, I can appreciate that. Most of the clients that we work with today once felt exactly the way that you did. And what they found was that at TLC Mortgage, we’re committed to having a longterm relationship with you, and not a short term win, because we know people have Facebook, they have email, they can reach each other. It’s a word-of-mouth culture now. So easy to tell people, “Hey, I was hosed over”, “Hey I had a great experience”. So we want to do right by you. And I’m telling you right now, this rate is absolutely the lowest we can do. And what I want to do is I want to set up a time to meet with you and your wife so we can answer any of the questions that you guys have before the rates go up. Because right now, government spending is at a crazy all-time high. We got the … What is it? The National Debt’s almost twenty trillion. Is it twenty trillion? It’s about twenty trillion dollars. And eventually, those interest rates are gonna have to come up to curb inflation. So when’s a good time for you guys to meet?

Steve: I don’t need to meet. If you can just get it locked.

Clay: But the point is, the concept here, Mr. Thriver and business coach listener who asked this question, is 1. You want to suck in air and you want to say, “So, what’s your main concern?” You gotta sound concerned ’cause you are concerned. And then they’re gonna tell you, and you have to say, “You know, I can totally appreciate that. Let me ask you” you know? And you want to get them talking. And then you want to come in and say, “Well, you know, you’re exactly right. In fact, most of the people that we work with felt exactly the way you feel”. So people don’t feel alone with their feelings. And what they found is …

Justin: Great question business coach, I mean, off the top of my head, I would say roughly, of current members, maybe 10-15% –

Steve: I agree with that.

Justin: -are coming back for the second time and maybe the first experience … You know, maybe someone was having a bad day and they needed to move on [inaudible 00:08:26] company. So it wasn’t a true representation of Elephant in the Room and what we do and our haircut experience. So, we actually target these guys and invite them back in and –

Clay: So quick deal, they maybe went to a different hair place, they were not happy. And so they decided, “You know what? I’m not happy with my current hair location. So I’m gonna go to a different hair service provider. I’m gonna try it one time”. They try it, they like it, but they were kind of not in the mindset to sign up for a membership. So you’ve invited them out back a second time. Is that what you’re saying to me as a business coach?

Justin: There we go. Yeah, yeah. So, I’d say a majority of guys, their first visit … You know, our members, they come in a first visit, 85-90% sign up. First visit. And then that 10-15% it may take them more than one visit. And so, we want to invite them back in, give them a crazy good offer, have them experience that environment, maybe a new grooming professional or a different location. We have three locations. And we just ask them again: “Hey, what would keep you from signing up today?” And you just go straight at them.

Clay: Here’s what I have discovered is if you go out on a limb, that’s where the fruit is. If you hunt, if you just kind of cling to the tree, and you say “I don’t want to get rejected, I don’t want to fall”  Then you’re not gonna convert a lot of people to buy something. That is just good business coach advice

Steve: I’ve got something for you, Clay.

Clay: So, now Steve, you’re a top-preforming mortgage producer. I’ve worked with little mortgage companies in the past. We’ve talked about that before. I worked with other companies. Currently, I have the honor of working with you. But so many mortgage professionals fear rejection, so they won’t ask for the close. They won’t try to overcome an objection. But I know that you sincerely believe that TLC, Total Lending concepts, is the best mortgage solution. I know that Justin sincerely believes that the Elephant in the Room is the best men’s grooming lounge solution out there; the best men’s grooming experience, the best men’s haircut experience. So I know both of you are 100% committed to making it the best and I see the work that both of you do behind the scenes to make it the best, the little extra oomph as I am as a business coach.

So when you’re talking to somebody and they object and they say, “You know what Steve? I don’t think you’re the right fit”. How do you process it? What’s going on in your head? And then what’s kind of your tip for all the business coach listeners out there?

Steve: Well, a couple things. First of all, sometimes people aren’t a good fit. And it’s a great thing to be able to recognize as a company that you’re not a good fit, because why would you want to chase after a customer and try to smash them … You know, it’s the square peg in the round hole kind of thing? Now, I’m also a sales guy. So I’m like, “Everybody fits”. I gotta do their mortgage, right?