Business Coach Importance of Staying in Front of Prospects

All right thrive nation, your DJ business coach here…. can we keep each other company this afternoon? Can we do that? I know you’re busy. Maybe you got some stuff to do. Maybe you got some errands to run, maybe you got to get some dry cleaning. Maybe we can just spend some time together for 15 minutes, maybe 30 minutes. Or maybe you go to thrive time show dot com and you check out the entire podcast either way, we are here everyday to help you create that daily mojo that you need. This is the dojo of mojo. We’re broadcasting live, left coast of the Arkansas River inside the thrive fifteen dot com world headquarters. 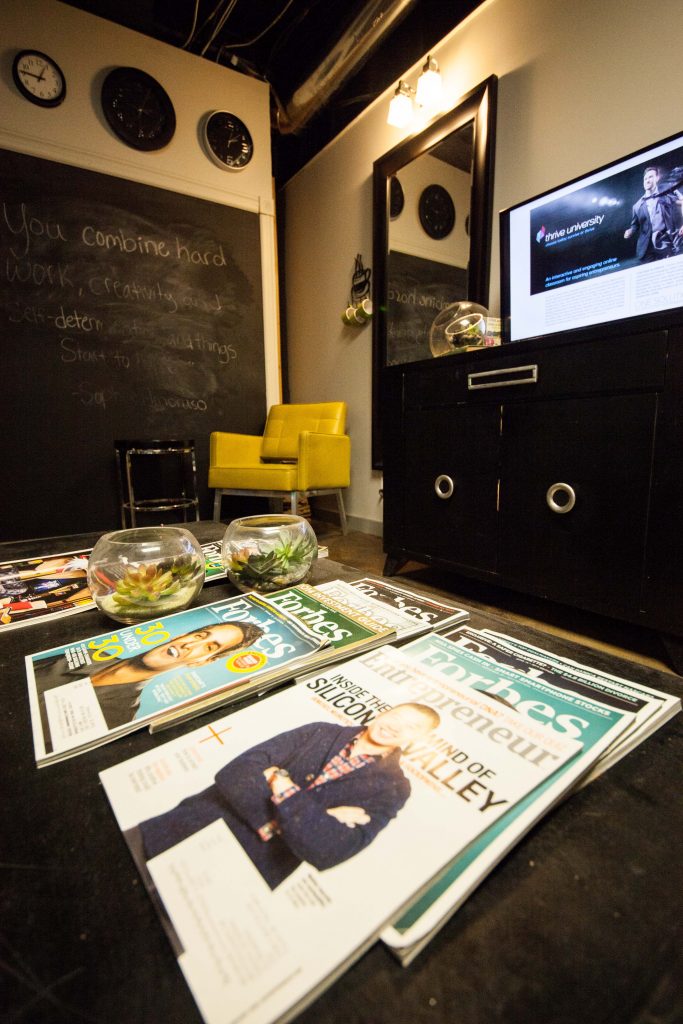 Inside the box that rocks today we have a guy who’s built a local Tulsa success story. A successful business and business coach client. Full disclosure, it is my brother in law. It is the man with a plan. It is the co-host with the most today. It is the guy who wears a hat but he owns a men’s grooming lounge that focuses on men’s hair. So he is a guy that has a beard that says I don’t care. It is   . Tulsa, you wanted More so we brought him back.   how are you doing my friend?

: I’m doing amazing and I know it looks like I don’t care but I worked hard on this style. By the way, this beard today got washed, got cleaned, hot towel, we did with oils, we did the blow dryer. All that. If you have a beard you need to come in to Elephant In The Room.

Business Coach Clay Clark: Gloves off, here we go. There’s a lot of people out there. They see at whole foods and they’re like I think this guy must be Amish. He’s got to be Amish. They’re not saying it out loud though. They’re just looking at you like does he churn butter? Does he make his own soap? But there’s a lot of dudes, there’s a beard movement sweeping our country. There’s many men out there with beards. They have these beard challenges. What are some of the challenges that men have with their beard and what kind of things do you do that tame those beards? What kind accoutrements? What kind of things can you do to make a beard manageable and smooth? What do you do?

: There’s a lot of maintenance.

Clay Clark: A lot of maintenance?

Clay Clark: You have a beard membership now right?

: We do. I’m so serious. If you are in Tulsa or surrounding areas and you have beard, come out. A lot of guys have never had their beard professionally groomed before. I know you’re probably laughing at this but if you have a beard and you haven’t had it professionally groomed, come in. Let us take care of your needs as far as the beard. Maybe you already have someone that cuts your hair but they can’t touch your beard right? They don’t know how.

Clay Clark: OKC. Claremore. We have one guy, a client of business coaching, and I know this specific story. He works in the oil and gas industry and he flies in to Tulsa I think once a month from Dallas or something. Homeboy’s a member and comes in and gets his hair cut. I’m just telling you what, this wouldn’t be possible if you weren’t staying in touch with your current customer database.

There’s many customer service database systems out there. Many customer relationship management software programs. If you can find a good CRM or a customer relationship management software that will do this for you. Do it. There’s a program called Twilio which is a great program. The only problem is if you have a customer that cancels and starts and stops and comes in now their phone numbers in the database twice or six times and all of a sudden,  , they might get 17 text messages in one day. Gets a little crazy.

Clay Clark: It might have happened. Sorry. Man these guys are really are texting me a lot. So the text message move is a next level business coach move. Now that you have a great customer relationship management software. Now that you have done the research to do that. If you missed how to do that go to the thrive time show dot com to hear the rest of this podcast. But once you have that set up  , why is a text message so powerful?

: So I’ll go back to number one. After you create your database you have all these different opportunities. If I didn’t have a database, it wouldn’t matter what company can send text or voicemail or email or things like that. But we’re in an industry now to be honest, people do not leave their cell phone. It doesn’t leave their side. They have stuff wherever they go. So they may be too busy to talk but they aren’t too busy to text. There’s different alternates. You can’t just I call them. So I tell my employees when we have our employees in our call center, when you call someone if you don’t even leave them a voicemail it’s like you never even called. So texting is huge because we tapped in that market. You can text to book an appointment now.

Clay Clark: I’d call this move the woof because whenever I try to reach somebody, if I try to reach you. This is an example. If I try to reach  , we’re partners this is what I do. I’ll call you, if you didn’t answer I realize it’s because you’re on the phone or doing something else. So I’ll send you a text. If I don’t hear back I’ll send you an email because I realize maybe you didn’t see the text or maybe your phone’s not with you, or maybe you went to sleep. Whatever. I call it the woof because eventually it will make the person bark back. So what you do is you call, you text, you email. If I want to reach somebody I do it. I take no offense to it.

Dr Zoellner for example, he is so good at this, at being a business coach. I don’t know if he took it as far as Steve Jobs. Steve Jobs, he talked about focus and I just want to read this Steve Jobs quote to you because when you hear this and you get a chance to marinate on this I think you’ll kind of get why Dr. Z and people who are very successful do this.

Steve Jobs, he’s a co-founder of Apple. A lot of people don’t know this but George Lucas, the guy who started Star Wars, ended up starting a little company that is called Pixar. The guy who started Star Wars started Pixar. He was going through a divorce and he was like holy crap, I’m gonna lose my company to my ex wife. So he called Steve Jobs. He said, “Steve? Here’s the deal. I want to sell you my company.” So he sold Pixar to Steve Jobs. Steve Jobs ended up taking Pixar and launched the movie Toy Story. A lot of people don’t realize this but George Lucas wife edited a lot of Star Wars. The first movie his wife edited because she was an expert at that and she knew what she was talking about. They worked together for a long, long time for years and years. They got a divorce and she wanted Pixar understandably. So he sold the business, I cannot say I agree with the ethics but he sold it to Steve Jobs. Bill gates says everybody needs a coach. Is it time for you to get a business coach?

So here’s a favorite business coach Steve Jobs quote. He says, “People think focus means saying yes to the thing you got to focus on. But that’s not what it means at all. It means saying no to the hundred other good ideas that there are. You have to pick carefully. I’m actually as proud of the things we haven’t done as the things I have done. Innovation is saying no to a thousand things.” What happens is Dr. Z does not respond to the text messages of almost anybody, or the voicemails, or the emails. So I just understood when I was his partner. I pulled him aside one day and I said, “Hey, I would really like to get you more involved in Thrive 15. Our online school.” He looks at me in the eye and he goes, “Hey, I only own two percent of the business so no offense but you’re only getting a small percentage of my mind. If you want to make me a partner then I’ll answer that call but if not I have other things to worry about.” I’m like what?