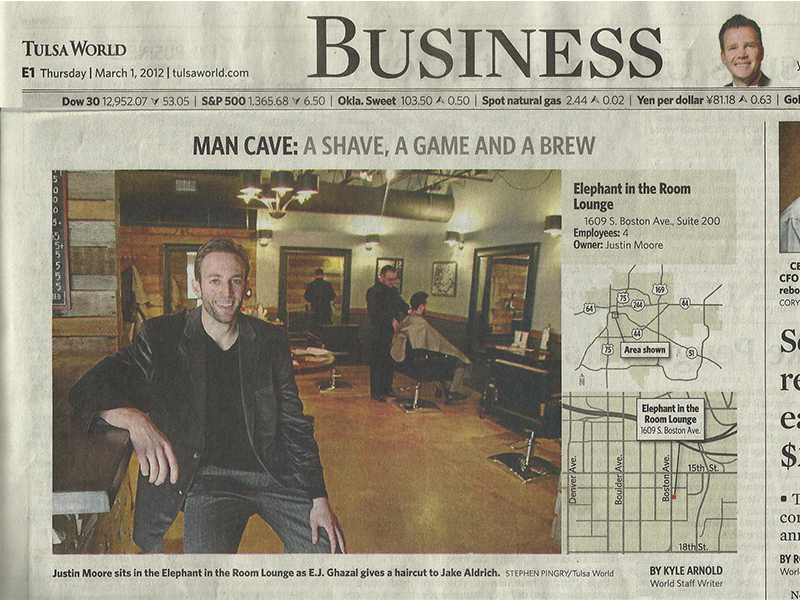 Justin: So I mentioned five years and three shops, eighty employees. I couldn’t do that on my own even with a business coach. So we definitely have an amazing staff of people. But 1. They wanted to grow. 2. They were eager to hear feedback. They could take that feedback without crying, weeping. So the kick and the hug. A lot of times instead of telling employees what they need to do, I like them to figure out and problem solve on their own ’cause they’re growing. So I ask them questions instead of telling them, and say “How did that make you feel when your fellow teammate/staff member showed up late or called in sick and you had to work their shift? Would you want them on your … How’d you handle that call?”

So for example, we’ve got two things going on. We have a plethora of hats and jackets at our shop.

Clay: Now here’s an example that I do in my business coach and other businesses when you talk about a carrot and a stick. A kick and a hug. Jonathan Kelly’s one of our teammates and he gets paid based upon getting things done. And Jonathan is a doer. He thinks this is the best system in the world. So many weeks, you know, he can make two thousand dollars a week, twenty-five hundred dollars a week. There’s been a couple weeks where he made three thousand dollars a week. But John goes, “Wow. If there a kick and a hug … If I get paid based upon my results, I like this game. This is a fun game. So if I do something I get paid more? Wow”. Other people say, “I don’t like that. That seems so cruel”.

So at our job, at Make Your Life Epic, my business coach consulting company, we do PR and marketing for companies all over Tulsa. Basically if your logo and your branding’s terrible, we help you do your marketing, your video, that kind of thing. And then over time we realized, we don’t have the ability to scale that. Which is why Dr. Z and I teamed up to build thrive15.com, which is now the world’s most affordable and best business coach program. We offer you an entire team of graphic designers, photographers, videographers, sales people, recorded calls, scripting, content writers, business coaching. Everything for less than you would spend on a barista. It’s like having a team of business ninjas for less money than you would spend on hiring a barista full-time.

And so we built that team, and that culture is all based on a merit-based pay. Meritocracy. If you’re a business owner and you don’t wow the customer, they don’t come back. Steve, talk to me about the kick and the hug of being a mortgage professional. I mean, obviously if you don’t close any loans you don’t make any money, man.

Steve: Yeah, and I think that it’s just almost like our culture now. The entitlement of … Like you said, it’s not their fault that their parents didn’t teach them.

Steve: And I’ve got a thing that I say. I gotta leave people better than I found them. Right? And sometimes … I think everybody, not sometimes, but everybody needs a kick in the pants once in awhile. And everybody needs a hug. But I think for me … I just did this today with somebody. I had to tell him, “Look, the got-a-minute’s are killing me”. Like, “Got a minute?” “No! I don’t ‘got a minute’. My door was closed and locked. So why do you think I had it closed and locked? ‘Cause I’m busy”.

Clay: Did he pick the lock?

Steve: No, it’s just “bang bang bang”. And I’m like “What?!” You know? And so then, the hug is I took them to lunch. Sat down with them. Tell them I appreciate them. Tell ’em how they do good work. But, here’s the boundary. We’ve got to have some boundaries and we’ve gotta have some things. And it’s the same thing with production. Kick and the hug is “You didn’t make your calls. Here’s the kick”.

Clay: Now we have Thrivers right now who are texting us, and again the number is 918-851-6920. 918-851-6920. Get into the business coach conversation. Don’t just watch it happen but get into. You can text us, 918-851-6920. We have a Thriver who writes, “What’s the best proven system to gain customer referrals?” I have a prove method for this when we come back. It’s cited by Harvard and I think it’s gonna blow your mind. What’s the proven way to gain referrals? I’m gonna teach you when you come back. Stay tuned to the Thrive Time Show on your radio.

All right Thrivers, we have many of you texting us now. You’ve got the business coach fever, you understand that when you text in a question, we actually answer the question. Kind of a profound thought. When you text us, we respond. And the text message just came in hot. It says, “What’s the best proven system to gain customer referrals?”

When people are wowed, they’ll tell somebody about it now. So here’s an example. Steve, you are now top in Google, am I correct?

Clay: And if I google, what? “Tulsa mortgages” I can find you?

Steve: He’s way topper than I am.

Clay: Now you are in a very competitive industry because typically, on a mortgage, a mortgage professional, you guys make a commission of some kind on the mortgage. Is it typically 1% or what’s kind of the commission that a mortgage banker … Someone who’s thinking of about becoming a mortgage banker. What kind of commission percentage do you make?

Steve: It varies on experience, obviously. And it varies on what type of company you work for, and whether you bring it in the door or the company generates it for you.

Clay: So if it’s a two-hundred thousand dollar loan, how much money can a typical mortgage banker make? Typically?

Steve: Well, if you’re like a top-dog, you might make … What we call in “basis points”, you call maybe “percent”, one and a half percent of that. So you could make –

And so you told me, you said “Hey Clay as my business coach. I want to get to the top of Google”. We talked about this. And you came in, you faithfully recorded your podcast. I mean, you talk about diligent doers, Thrivers, you know. Proverbs says that God blesses the hand of the diligent. That’s Proverbs 10:4. “God blesses the hand of the diligent and he punishes the slacker”. “Is this a biblical show?” No. So, Steve has just been grinding. I’m talking everyday this guy is just grinding. And so he comes in here, you record a couple hours every single week, inside the box that rocks, a podcast that you pay to have transcribed and whoever has the most text gets to be to the top of Google.

Steve: You can find it at stevecurrington.live, instead of dot com, dot live.

Steve: Or, on iTunes you can find it under the “Steve N’ Tyler show”. Kind of like, you know, Steven Tyler. Like the rock –

Steve: Well, Sam’s here so I won’t lie. But our time is like six-thirty. So we usually roll in some time about six-thirty, about six forty-five, in the morning on the Wednesdays we record. And then we also do it on Fridays in the afternoon. And then we also have a couple other times that we don’t do it in the box that rocks, that’s kind of more of a less-official podcast where we’re recording. And then we have another guy that works for us that all he does is record podcasts like the business coach one we are doing right now.