Business Coach The Art of Getting Things Done

Business Coach Clay Clark – I call them the [holiplagues 00:09:28], by the way, because so many people who can’t afford it are taking time off. They keep taking time off and at the end of the year, they haven’t sowed any seeds and now they can’t reap a harvest and so therefore, we’re talking about today, sowing and reaping. It’s call the law of cause and effect. Basically, it’s the belief that what you do affects where you get to. What you do affects where you get to. So,  I want to ask you this, Napoleon Hill has this notable quotable, and I’m going to read it to you and I want to get your feedback on it. 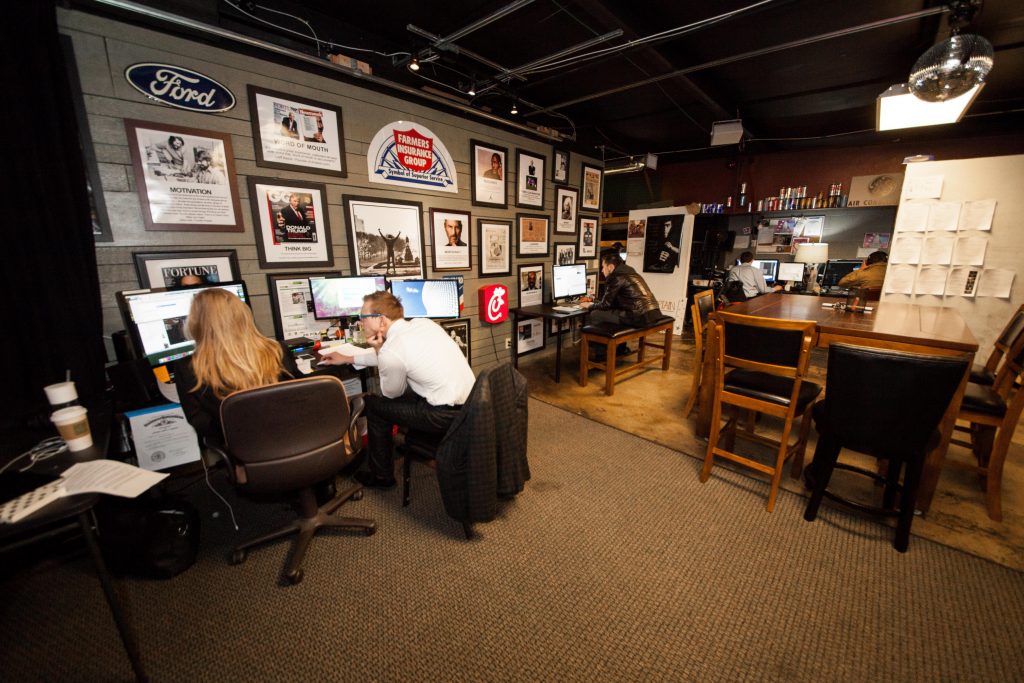 So Napoleon Hill says this, he says … Who’s Napoleon Hill? He’s the world’s number one self help author of all time. On page 28 of our boom book, he says this, “The quality of service you render, plus the quantity of service you render, plus the mental attitude in which you render service, determines the space you occupy in your chosen calling and the compensation you get from your services.” So I want to ask you, I’m listening right now, how have you, at Elephant in the Room tried to focus on the quality of the service and the mental attitude with which you sow those seeds?

Business coach client: Yeah. These principles that you just talked about by Napoleon Hill, which I think he’s onto something, I think he’s written a book or two, but I’ve implemented those into my life the past five years and so all I want to do is share those same ideas and principles with the people that work with me and for me. To be honest, I’m underpaid and I’m the owner, so you’re always going to be outworking your pay because your income is going to be a little behind the effort you put in, and that’s how you continue to get raises and bonuses. There are certain employees that I want to pay more, that I approach them and give them those bonuses before they have to ask for their raise.

I was actually talking about this today because we moved into our new location for our downtown. We just had a re-grand opening, it was five years at our first location, we just moved that first location to a new spot, bigger spot. You’ve got to go bigger, you’ve got to go better, but I made this comment to an employee, I said, “My idea is, I’ll never be satisfied, it’ll never be where I want it to be.”

Clay Clark: I’m Mr. Squirrely, I’m going to ask you this, how long until you started not putting money into the actual … Where you’re actually making some money from downtown? Was it a couple years or was it-

It was definitely a couple years-

I would say two years in. It was a year before I even paid myself and then two years in before- and having a business coach helped so much.

Clay Clark: So Thrivers and business coach clients, I’m going to tell you this, we worked super hard for two years, putting all his money back into it. Then he got this crazy idea, he says, “Clay, let’s open another one.” So we take the money from the first store, we put it into the second. He caps his salary, so he’s not making any more money. Then we open up store three. What’s happening is, now, the exponential growth of the business is growing so fast, we have so many people like you reach out every day going, “Hey, I want to invest, I want to open up a location, can I do it?” We have to say, “Listen, we’re going to open up one in [Jinx 00:12:22],” coming soon, “One on [Owassa 00:12:23], but we can’t keep up with that demand.” It’s not because we’re geniuses, it’s not because we are God’s gift to men’s grooming, it’s because he wants to over deliver and that’s the idea. So question number one, where’d you get the idea? We just talked about it. Also question number two is, the sowing and reaping, what kind of seed sowing did you do?

Now here’s the deal Thrivers, if you’re struggling financially, you want to stay tuned to after the break, you want to stay tuned because during our next segment, we’ve got a guy by the name of Kevin Jacobs. He’s a certified financial planner at Step By Step Financial. He and Dr. Zoellner are going to be joining us and they’re going to walk us through these steps that you need to take, the nine steps to becoming financially free. So I don’t care whether you start a business, whether you work in a business, or whether you’re growing a business. I repeat, if you’re an employee, if you’re an employer, you want to listen to this next segment because he’s going to walk you through the moves that will guarantee you … Check it out, if you’re 30 years old, the moves we’re going to teach you, I guarantee you, you will end up being a millionaire as long as you don’t die by age 60.

So we’re going to teach you the magic moves to becoming a millionaire between age 30 and age 60, step number one though, you’ve got to stay tuned, okay? Step number two, you’ve got to implement those moves. Step number three, you’ve got to make sure you don’t die for the next 30 years because it’ll be hard to reap the harvest if you die. I’m telling you what, you’ll never have to invest more than $670 per month with the moves that Kevin Jacobs has for you. You want to know what those moves are? Of course you do. So you want to stay tuned here. It’s all about money on this edition. We want to help you become financially free. It’s the Thrive Time show on your radio. My name is Clay Clark, go to ThriveTimeShow.com check, check, check it out. Stay tuned, it’s all about money and becoming financially free.

Thrive nation and business coach clients, welcome back into the conversation, my name is Clay Clark, sent her from another planet called Claytron the main business coach to help you grow your business, to help you expand your wallet, and to help you achieve financial and time freedom. So I brought on a freedom fighter, a man who helps people achieve financial freedom on the daily. It’s Dr. Robert Zoellner, the cohost with the most. Sir, how are you doing?

Robert Zoellner: I am fantastic. It’s Friday, we’ve got our little Lunchables here working. We’ve got our little snack snacks. We’re just trying not to chew on the mic and enjoying our Oklahoma Joe’s barbecue, a little burnt ends-

Clay Clark: It’s always gets weird when you have an adult-

Clay Clark: Catch you eating your microphone because you don’t have access to baked beans. It’s always just kind of a weird deal when that happens.

Robert Zoellner: Then you just put barbecue sauce on and you just kind of sit here and-

Clay Clark: I didn’t have any baked beans, so I started eating the microphone Dr. Z.

Clay Clark: The microphone budget really goes up when there’s no Oklahoma Joe’s being served on set. That’s a [crosstalk 00:15:17].

Clay Clark: We have a guest who has joined us, first segment we had Sean Copland the CEO, the president of Regent Bank. It’s like, how do you-

Robert Zoellner: I heard back in the day he was quite the little … You know.

Clay Clark: Not kidding, I have a guy, he’s a friend of mine, he’s not a head of a … I think he’s a principal at Bixby Schools, Jay [Bittle 00:15:44], if you know Jay Bittle and you’re a listener, say hello Jay Bittle, give him a text, but Jay used to DJ for us back in the day when he was a basketball coach for Bixby.

Robert Zoellner: So Jay was a DJ.

Clay Clark: He was.

Robert Zoellner: You know, I often feel like I’m in a locker room after I’ve been around him, so that’s probably why.

Clay Clark: Yeah, it’s a handshake followed by a hug. It’s his move.

Clay Clark: I will tell you this, we have a guy on the show who makes every … Every man wants to give this guy a man hug because he just … When you’re around him, you realize he’s funny, he’s factual, and he knows financial management. This is Kevin Jacobs, he’s a certified financial planner with Step By Step Financial, LLC. Kevin, how are you doing my friend?

Kevin Jacobs: I am doing fantastic.

Clay Clark: Now, can you explain to the business coach client and Thrivers out there, we’re talking today about sowing and reaping, that’s the whole show today is about sowing and reaping and we’re going to get really into some specifics about how this will work. Basically the law of cause and effect for business owners and people who want to improve their career. Talk to me about financial planning and why the sowing and reaping concept is so true for people just to continue sowing those seeds they want to reap that reward in the future.

Kevin Jacobs: Sure. I would say the sowing is the saving part of it. Spending less than you make. So many people, they want to know why they’re not financially secure and all of the sudden it’s like, well, you’re not saving, you’re spending more than what you’re making. Which is a problem and you did that consistently over a long period of time, you’re going to be broke. So the sowing part of it is actually realizing there is a tomorrow and you need to set some money aside, and you need to say, “Hey, I’m going to save for a rainy day.” Call today to find out more about our business coach program.