I think, more often than not, business owners get caught up in all of the details of the business, right? So, you’re an entrepreneur. You’re waking up every day and, business coach Clay, I know that you say this, entrepreneurship is a lot like you’re chasing a bag of gold. You’re chasing a treasure chest while being chased by a lion at the same time. 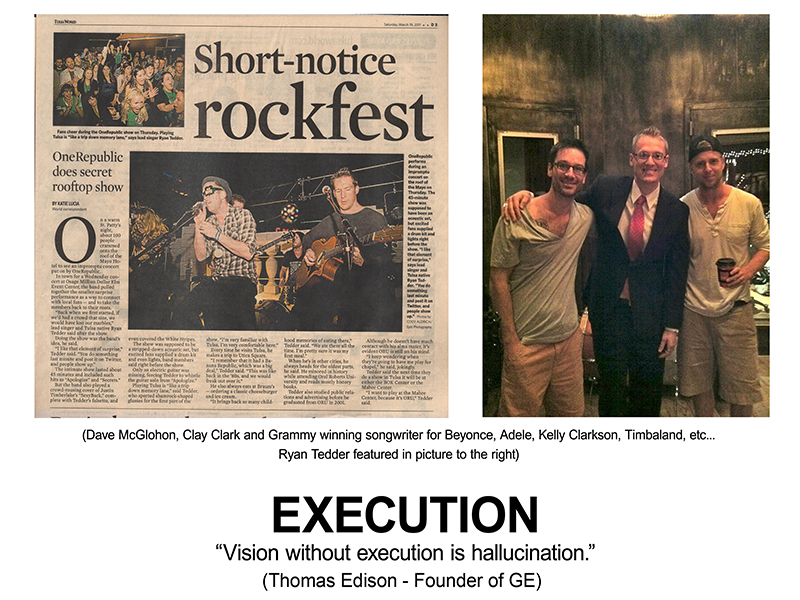 Robert Zoellner: Yeah, yeah, so you have all these different things going on, and you have your operations, right? And you have your marketing, and then you have your sales and your accounting, and ultimately, all that is streamed through you, right? You’re the business owner.

I think what happens a lot of times is business owners, they get distracted, right? They focus on one thing when they should really be focusing on another thing, which is what a business coach does, is says, “Hey, we’re focusing a little bit too much on this one thing that’s not contributing towards blowing up your biggest limiting factor right now. We should really be focusing over here.”

Clay Clark: Well, here’s what it was is Brucey-Bruce and I had to make a video. Because a lot of people want to know, what’s the Thrive Time workshop experience like? And what’s happening is, hundreds and thousands of you are coming out to these things, and you’re going, “Oh my gosh, these are awesome! This was great! I cannot believe there was no upsells. You guys taught me sales and marketing and search engine and leadership, and the coffee bar’s cool.” And I met a guy from Toronto and a guy from Canada who are both business owners, and we have this awesome fellowship.

But, then, if somebody else tells you their experience, then that’s a pretty profound thing. And so I had to get up at 3 AM and write out the scripting to produce the new business coach video that you can find at the business coach ThriveTimeShow.com. If you go to ThriveTimeShow.com, and you click on the “Conference” button, there you’re going to find the video that Brucey-Bruce and I just finished. But that took about … We didn’t finish it ’til 10 AM. So I started at 3 AM, Bruce got there at six to do the editing, and we finished at about 10. So it was about seven hours of what I would call meta time.

Now, meta is what you have to do over and above your day to day, just treading water, right? At the end of the day, there’s things you have to do every day that are those reactive things. You just have to get them done. But then if you want to be proactive and actually get ahead, that’s a whole different game. I mean, getting ahead is so different. It feels so different from just getting by. And so, because I’ve been in business for a long time, I realized, hey, just because I want to spend seven hours making an unbelievable video … Seven hours! Robert, it was seven hours, seven.

So when someone says to me, “I want to make a great video”, I always tell them, “That’s great. When are you gonna block out the seven hours?”

And then, once I finished those seven hours, then … It’s a Saturday, so I’m gonna go be Dad all day, right? So I’m hanging out with my kids, we’re going to Atwoods, buying anything that they’ll sell us in bulk. We always want to buy something in bulk. We want to buy … We did s’mores. We went to Taco Bueno.

Clay Clark: We visited Grandma. There’s all these things we do, right? And then, when they go to bed, after my wife has gone to bed, that’s when I do search engine reports.

And so the business coach search engine reports, no exaggeration, Robert, they take me almost eighteen to twenty hours a month now, to do these things. And it’s my highest and best use because it’s very hard for people to understand all the nuances that go into that.

Clay Clark: Even though I’ve delegated a lot of things, that’s something I have to do. But at the end of the day, Robert, why do I hold myself accountable?

Robert Zoellner: Because, if you don’t hold yourself accountable, then nothing’s gonna get done, Clay.

Clay Clark: And, I’ll tell you why, because, Robert, I am absolutely focused on winning. I just want to win. I have an insecurity … I never want to be poor again, or you can call it motivation, or drive. At Starbucks, you go in, you go, “Yeah, I’d kinda like to get the, uh, the mocha, uh, blend with the extra espresso in it-“

Robert Zoellner: That’s the best one, by the way.

And then, even though I’ve made it to where I want to go, I’ve never lost that drive, or that sense of urgency, or that get-it-done. And I think a lot of entrepreneurs … It’s new to you to work that hard. You’re not around people that work that hard. I think, Robert, it’s not normal to be surrounded by people who go that hard and work that hard on a consistent basis.

Robert Zoellner: And, Clay, I have a question for you.

Robert Zoellner: Because this is something that, in working with people … They are working hard, right? They’re working very hard, and it can sometimes become overwhelming. And I work with different business owners, and sometimes they come to the meetings and they’re like, “This is hard, this is tough. I don’t know how to stay motivated. I don’t know how to keep focused.”

Clay Clark: Now, when we come back, Thrivers, we’re gonna get into what daily diligence looks like, what that daily grind looks like.

All right, Thrive Nation, welcome back. Welcome back into the conversation. It is the Thrive Time Show on your radio. My name is Clay Clark, and welcome back to the audio dojo of mojo.

You know, there’s so much negativity on the planet. There’s so many people telling you that you can’t do it. There’s so much data that shows that you’d be crazy to think that you could. And according to Bloomberg, eight out of ten entrepreneurs who start a business are gonna fail within the first 18 months.

Another example of a negative statistic that’s out there, but one that’s very, very true … This is from the Bureau of Labor Statistics. This is actually from the United States government. And what they have found that about half of all new establishments survive five or more years. And then those that do survive, only about one third move on for ten years and beyond. And so there’s a lot of data out there that shows … Forbes has this statistic that shows you that eight out of ten small businesses fail.

And the good new is that if you want to vaccinate yourself against failure, you want to make sure that you don’t fail, there is a proven way to do this. There’s one way that will guarantee your success. If you’re saying, “Oh, yes, yes, that’s me”, well check it out.

Well, if it is genetics, then what you want to do is you want to make sure that your child grows up, or that you grow up to look like a man-bear-pig, if you’re looking for the great genetics. Because I am not a beautiful man, but the businesses do beautifully well and I am a great business coach.

So what is it? Is it luck? Is it luck? Because if it is luck, then you’re probably gonna hurt your right ankle all the time randomly. Anytime you’re engaging in any kind of activity at all, you’re just gonna roll your ankle, because that’s part of the luck that I have. I always am rolling my ankle. And then you’re always gonna be stepping on your kids’ toys in the morning. You might wake up at three or four in the morning, looking to grab a glass of water, or to get your day started early, and you’re always going to find a sharp, metallic toy. My kids don’t even own that many metallic toys, but I always will find it with my foot, because of my incredible luck.

So if it’s not luck, and it’s not connections … If it’s not … Is it capital? I mean, did you grow up with a ton of money? Do you need a ton of money in your bank to start? Do you need to have just a ton of cash? Well if you do, you’re gonna start out as a dishwasher like Dr. Robert Zoellner. You’re gonna find yourself working seven days a week, like he did to get his start. You’re gonna find yourself, like me, having three jobs, working at Target, working at Applebee’s, working at … Think about it. Is it cash? Is it luck? Is it connections? What is it that makes Dr. Z and I successful?

And I’ll tell you the one thing it is. We have a proven path that we have followed. Both of us have been mentored by people. We’ve been very, very curious about the proven path to success. But now, Robert, we have actually distilled our business coach proven path into a 13 point system called the Boom Book, which you help clients execute all the time. And, Robert, why is this system absolutely proven? What about the system is … ‘Cause you’re in it every day … For the first time you encountered the system, what blew your mind about that 13 point system?