Memorization is Not For a Business coach

As a business coach and owner, I don’t know a lot of things. I don’t memorize a bunch of things. But I know where things are. 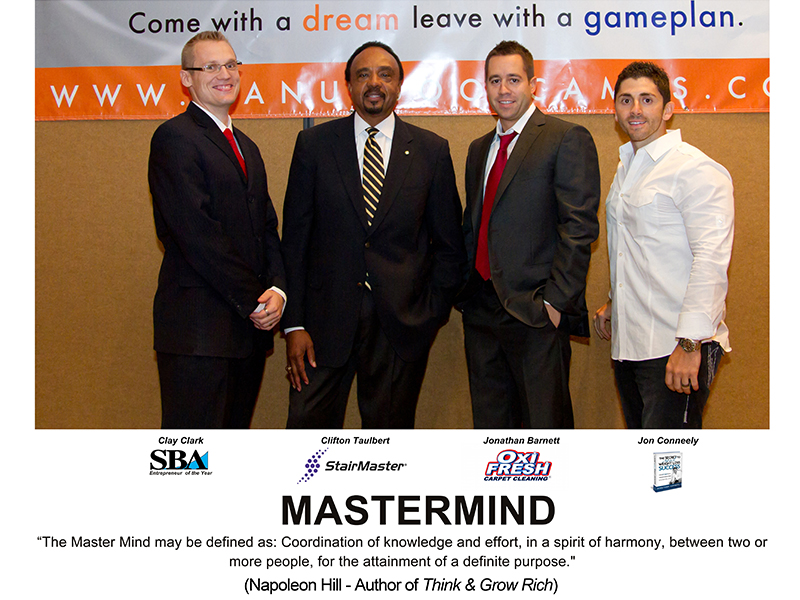 Robert Zoellner: Probably the most important part of the script, it allows everyone to be an incredible salesperson. It allows everyone to be an incredible salesperson because, if you’re basing that script upon what the best salesperson, or more times than not, probably you as the entrepreneur … What you actually say when you’re saying something is scripted out, now someone can come into the organization and start selling as good as you or the best person in your organization because they’re saying those things that get the sales. They can’t do that without a script. Get a business coach to help you write a script!

Clay Clark: And the other things you have to have to build a sales culture that’s gonna win is you have to record your calls. You have to record a best practice call, so that anybody who’s new who joins the organization can hear what a good call sounds like. You want to have an entire database of recorded calls. These are calls … They are the best practice calls where you’re showcasing somebody who is implementing your script.

Robert Zoellner: Number one, so that you’re not having to spend a lot of time writing an email for each lead comes in, and then wasting your whole day just sending out an email.

Number two, so that you’re sending a proven email that works. So you’re not forgetting, “Oh, what did I say? What was that last email? What …”

Clay Clark: As an example, if you want to come out to an in-person business coach workshop, one of the things that people want to see all the time is testimonials and reviews. And Robert, we have a really hot video on ThriveTimeShow.com that people can watch. And if they watch it, they always go, “Oh my gosh, I know that person in the video! Oh, I didn’t know you guys worked with those people. Oh wow!”

I’m just telling you, there’s something magical, when we have hundreds and thousands of Thrivers who are telling you about their experience first hand. It becomes a magical thing. Well, if my salesperson forgets to send that to you, then all of a sudden, we have a whole problem.

Robert, you’ve coached with a lot of clients, all over the country, many different states, from the left coast to the right coast, from the Atlantic Ocean to the Pacific Ocean, people right here in middle America. Why is it so hard to nail down the pricing for many entrepreneurs, from your perspective, having worked with business owners?

But they frankly do an awful job teaching you this at most colleges. They just don’t teach you the practical skills. I think part of it is because it is a four-year product they’re trying to sell you. They’re trying to convince you that you should stick around for four years to learn what you need to learn. And so they need it to take four years. That’s part of the problem, that’s kinda a disingenuous goal.

Robert Zoellner: Yeah, I was actually thinking about this just yesterday. So, an engineering degree, that’s a lot of high-level math. That’s a lot of studying, and they typically study, engineers, three times harder than, let’s say, someone who has a humanities degree. Humanities.

And I thought that just yesterday, I said, “Why does someone who’s studying engineering and all this complex math and science, why do they have to go to school the same amount of time as someone studying humanities?”

Clay Clark: So, Thrivers, let me tell you this. If you’ve ever struggled with pricing, don’t worry. When we come back, we’re gonna get into the nitty gritty details of how to effectively price your products.

The final thing you need to create a sales conversion culture that wins, is you have to have a quota. You have to hold every single member of your team accountable to certain metrics. How many outbound calls per day? What’s the sales conversion percentage? If you have five different sales reps, and Rep A sells 90% conversion, so for every inbound lead he has, he has ten inbound leads, he closes 90%, but Sales Rep B closes 50%, you’re able to fix things. Because basically you measure what you treasure. But if you don’t measure something, it’s impossible to improve it.

So when we come back, we’re gonna talk about pricing, and how to make the best pricing possible so your business can be profitable and sustainable. Stay tuned on Thrive Time Show.

All right, Thrive Nation and business coach listeners, welcome back to the Thrive Time Show on your radio.

For many of you, you are working so hard in your business on a daily basis. You are absolutely grinding all the time. You’ve read the motivational books. You’ve been on the websites. You’ve attended your fair share of Tony Robbins conferences. What’s happening is, is that you’re looking for a business coach to show you the proven path, because you’re not getting any satisfaction out of your business. You’re working as much as you possibly can, and you realize, “Okay, I cannot work anymore, my kids are getting older. My kid’s 13, she’s 14, she’s 16, I’m missing out on life. Oh my gosh, I want to get it right.”

So if you missed the earlier segments on today’s show, we talked to you with a passion and a sense of urgency about getting your branding done. Then we talk about your marketing, you gotta create a three-legged marketing stool, we get into the details of that. Then we talk to you about sales and converting your ideal and likely buyers, your leads, into actual paying customers.

But now this next step here is pricing. You’ve gotta have the pricing nailed down. So Robert, you’ve worked with a lot of entrepreneurs out there. Of all the clients you’ve worked with, what percentage of them have questions about what they should be pricing their products and services at? Do you get this question a lot or is this kinda rare?

Robert Zoellner: 80%. Eight out of ten companies I work with, we get into the pricing issue.

Clay Clark: Okay. And so I’m gonna give you a notable quotable that, to me, was very helpful. I think once you get this quote, and it becomes yours, and you kinda own it, and you say, “Okay, I get what he’s saying here.”

Paul Graham is a guy who is known for helping launch Airbnb, okay and sorta like a business coach. He started Airbnb. He also helped launch Reddit, Reddit.com. He also did Dropbox along with being a mentor / business coach to others. Those are just three I’m thinking of, there’s more … But what he talks about when it comes to pricing is that pricing is something that isn’t super complicated. But you need to write down this quote because when you hear it, it’s not gonna feel the way you want it to feel.

Clay Clark: Okay, so here we go. Let’s do an business coach example.

So you walk in, and you go there and there’s this guy called a barista not a business coach. He’s not called a coffee dude or a coffee guy, right? So the branding begins when you walk in the door. Actually, branding begins before you walk in the door. There’s the signage out there, the Starbucks signage, and when you walk in, there’s usually some music, a wine bar kind of a feel, kind of like a maracas … And some guy will walk up to you and his name is usually Madison or Skyler, or her name is Hamilton. And you walk up to this person, they’ll usually have a tattoo that’s easy to be seen, around the wrist area, one near the neck region.

Robert Zoellner: Right on their face.

Clay Clark: There’s usually a piercing of the ear that expands and makes almost like a tribal, gaping hole in the ear itself, expands the ear. There’s usually an eyebrow piercing of some kind. There’s just a hint of purple or blue, like one streak of blue or purple that says, “Listen, I’m creative but not too creative.”

And they look at you with a look of almost concern, “Oh, so you’d like a tall?”

And they go, “Okay, we’ll get you a tall.” And they write your name on the cup, and they hand you the cup. They usually say on the microphone or they’ll look out at you with a smile and they’ll say, “Clay Clark, your tall, venti cappuccino, Frappuccino, with a side of a yada-yada with the mocha-mocha is ready for you.”

And you’re going, “Oh, thank you, I don’t know what all those things were that you just said, but thank you so much.”