Business Coach and Speaker 3: Well, as I said in the last segment, just by being aware by going to the Nextgenunder30.com and seeing about the story there, seeing the history of what Nextgen’s all about, so that’s the easiest way to get up to speed on it and then nominate somebody in their 20’s that you know is just knocking the doors off at work and in the community, get them nominated and we’ll look at them and see about getting them selected as one of our Nextgen Under 30 honoree’s in the fall. 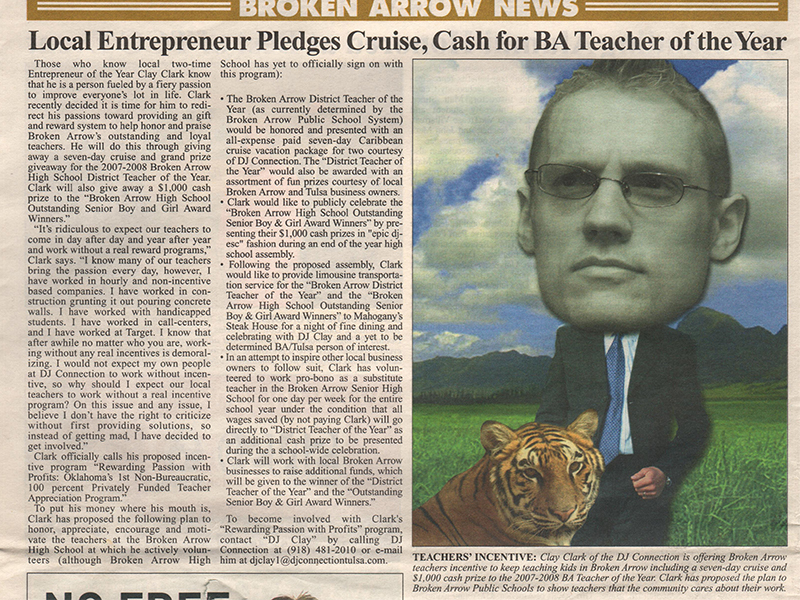 Speaker 1: You know, I know that Dr. Zoellner exfoliates. I know he spends a lot of time with his chiropractic care and his needs, but he looks like he’s under 30 now. I mean you look … Sir, you are looking-

Speaker 2: That’s why I’m 50. I’m kind of halfway between it actually.

Speaker 1: ThriveTimeShow.com. Check it out.

All right, Thrive Nation, welcome back into the conversation. It’s business school without the B.S. and yes, my name is Clay Clark. I’m the former SBA Entrepreneur of the Year, the father of five human kids, and a man who lives on an outpost there where we’re surrounded by chickens, cats, rabbits. I’m planting at least one tree every weekend. I commit to plant one tree every weekend, but I’m ambitious, Z. Sometimes it becomes three trees, four trees, I am a tree loving business coach.

Speaker 2: You over-achiever you.

Speaker 1: I just can’t stop planting those trees and when I’m not planting those trees I grow businesses in Tulsa. I have businesses in Tulsa where we grow these companies and what’s exciting is that the great people over there at Scripps Radio reached out to you Doctor Z, and said hey, you know, you have a successful company there, Clay has a successful company. He has successful businesses, you do as well, and there’s a big need in Tulsa. You know Forbes named Tulsa as consistently one of the top three cities in the country for entrepreneurs. I don’t know if you know that. If you Google Tulsa Oklahoma and Forbes and then the word entrepreneur, you’ll see that Tulsa’s been consistently named as one of the top five, top three cities in the world for starting a successful company, and so they thought that the listeners of Tulsa deserve to have a nonpolitical show, and so Z and I we agreed. We said we’re not going to be talking about the wall.

Speaker 2: We’re not to do like a home garden even though you talk about planting your trees, this is not a Home and Garden Show, by the way.

Speaker 1: Oh, I violated that agreement.

Speaker 2: No, no, no. You just casually mentioned a personal aspect of your life and that’s okay.

Speaker 2: We don’t do cooking, even though I found a really good Jell-O recipe the other day.

Speaker 1: Could you talk about it for an hour after the break?

Speaker 2: You know we’re not obviously like you said politics or religion. We’re going to just focus on practical steps and how to start and grow a business. That’s it.

Speaker 1: Can we talk about religious politics, like who’s winning-

Speaker 1: In some of these-

Speaker 1: It’s not something we talked about. I mean that would be a great show. The fascinating aspects of religious politics wouldn’t that be a great show, Sharia Law in-depth?

Speaker 2: Oh, my gosh, business coach I shouldn’t have brought it up.

Speaker 1: Broken down by business coaches.

Speaker 2: No, no, but that’s what’s so fun about it and like you said Tulsa is the DNA and the epicenter for entrepreneurism and that’s just awesome, so everybody listening out there in Tulsa we appreciate it but this journey started … The reason why Scripps approached me Clay, was about three years ago now I was saying two and a half there for a while, but you know time does kick on by.

Speaker 1: Time does kick on by.

Speaker 2: About three years now, you approached me with this really cool concept about taking business coaching instead of doing this one-on-one, “Okay, you and me in a room we’re gonna figure this out, okay? All right.”

Speaker 2: “Get out your pad and pencil, and we’re gonna write stuff and we’re gonna figure it out, me and you. Me and you.” Instead of doing it one-on-one we … You said hey listen, there’s a way we’ve got to scale this because we need to get this information out to the millions of people in other countries because last time I know I heard you’re not flying to Singapore and doing any business coaching over there are you?

Speaker 2: Yeah, well that’s what I’m saying, so there’s people around the world that need this information even around the country that want this information. Most of the world looks to the United States to teach them how to start a business because they just know it’s our culture, it’s our DNA, it’s what we do here.

Speaker 1: You know, and the thing is Thrivers, is we found that one-on-one business coaching is powerful and effective, but what happens is so many people out there, you want to start a business and you just want to know a proven path.

Speaker 1: You just want to be shown the way that works-

Speaker 2: From somebody that you believe.

Speaker 1: Somebody who doesn’t have an ulterior motive such as a business coach.

Speaker 2: Right, and so we started Thrive15.com about three years ago and the plan was to go around the country and get as cool guys and gals that we could get. In other words mentors, millionaire, success stories, people that had done it, were verified, bonafide, boom, I want to spend an afternoon with this fellow, your kind of people, you know.

Speaker 1: Yeah, absolutely, and the thing is we wanted to make sure that we priced it fairly.

Speaker 2: Business coach Clay,  What ivy league was that-