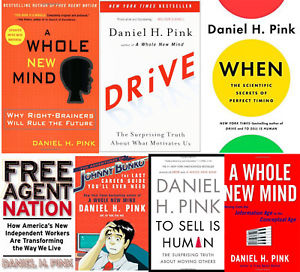 Throughout Daniel Pink’s career, he has been the host and co-executive producer of the National Geographic Channel Social Science TV series Crowd Control. He graduated from Bexley High School in 1982 and received his Bachelor of Arts from Northwestern University. He then received his J.D. (Juris doctor) from Yale Law School in 1991 where he was the Editor and Chief of the Yale Law and Policy Review. Dan is the author of six thought-provoking books, that I’m aware of, including his newest, When: The Scientific Secrets of Perfect Timing, which has spent four months on the New York Times bestseller list. His other books include the long-running New York Times bestseller A Whole New Mind, as well as the #1 New York Times bestsellers Drive and To Sell is Human. His books have won multiple awards and have been translated into 38 languages.