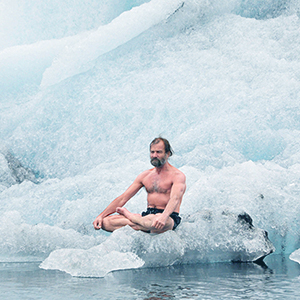 WIM HOF – Wim Hof got his nickname “The Iceman” by breaking a number of records related to cold exposure. Throughout his career, he has been featured in documentaries about him that have been created by BBC, Nat Geo, the Discovery Channel and more. Hof is the New York Times best-selling author of What Doesn’t Kill Us which shares how the investigative journalist Scott Carney actually first took an assignment to debunk the Wim Hof Method and instead ultimately ended up learning his techniques. His feats include climbing Mount Kilimanjaro in shorts, running a half marathon above the Arctic Circle on his bare feet, and standing in a container while covered with ice cubes for more than 112 minutes. Wim has developed what he believes to be the natural path to an optimal state of body and mind, which he calls the Wim Hof Method.