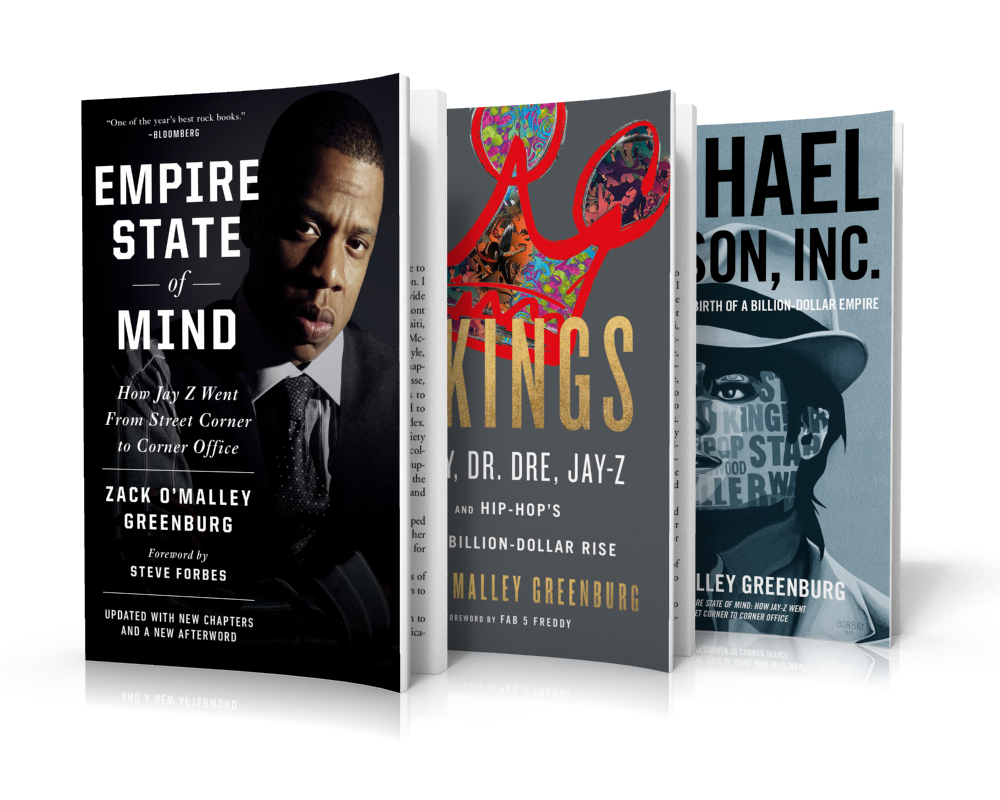 Since graduating from Yale, with a degree in American studies, Zack O’Malley Greenburg has gone on to become the senior editor of media and entertainment at Forbes and the author of three books: 3 Kings: Diddy, Dr. Dre, Jay-Z and Hip-Hop’s Multibillion-Dollar Rise(Little, Brown, 2018); Michael Jackson, Inc. (Simon & Schuster / Atria, 2014) and the Jay-Z biography Empire State of Mind (Penguin / Portfolio, 2011). Today, he lives in New York with his incredible wife and his cats.

Who is Zack O’Malley Greenburg?

Zack O’Malley Greenburg is a best-selling author, former child actor, public speaker, and most commonly known as the senior editor for Forbes, a leading global media company covering business, technology, leadership, investing, entrepreneurship and more. Zack O’Malley Greenburg covers the entertainment section of topics like music and other forms of media for Forbes. Zack is a former child after starting in Lorenzo‘s Oil directed by George Miller starring Susan Sarandon.

Living in New York City with his wife, Danielle and cats, Zack enjoys his passion for journalism, music, media and sports. In addition to making a name for himself as a best-selling author, Zack is also making headway as a presenter and public speaker. Currently, Zack is staying busy promoting his new book, A-List Angels – How a Band if Actors, Artists, and Athletes Hacked Silicon Valley. The book is available for purchase on Amazon and most local bookstores.

Business Journalism was a passion and a talent that came naturally to Zack. Starting as a staff reporter in 2007 for Forbes, Zack quickly fell in love with the combination of music, hip hop, and of course, business journalism and exposing the story. In January 2013, Zack was promoted to senior editor of Forbes, and remains an important asset to the entire Forbes team, including Steve Forbes himself. With endorsements from Steve Forbes himself, DJ Khaled and Arianna Huffington, there is no doubt about Greenburg’s publications making an impact in journalism providing updated information such as the Forbes list for the The Celebrity 100 | The World’s Highest Paid Entertainers and the Hip Hop Cash Kings, .

What is the Primary Role of Zack O’Malley Greenburg at Forbes?

Zack O’Malley Greenburg is the senior editor of media and entertainment at Forbes. Zack releases lists for the highest earning entertainers determining their estimated net worth, assets, projected income and more.

How Does Zack O’Malley Greenburg and the team at Forbes Come up with the Forbes Net Worth List?

Zack explains how they total the net worth list and estimates for some of the top artists. Particularly, Zack studies the top three which of course is Dr. Dre, Jay-Z and Diddy. Zack will typically take a look at the up and coming artists heading toward the list. Zack explains how they come up with the totals. They’ll typically take a look at the assets in a portfolio, they same Forbes totals any billionaire list. The list of assets includes an business or venture capital investment the artist is involved in. For companies that are not publicly traded, this requires a deep dive with extensive digging to figure out how the company makes its money.

Zack O’Malley Greenburg enjoys traveling and having fun with his wife. Together, the couple lives in upper Manhattan New York with their cats.

Who Has Zack O’Malley Greenburg Interviewed?

Zack O’Malley Greenburg has interviewed some of the biggest names in the music industry today. Some of these artists include Kanye West, Ludacris, Jay-Z, Dr. Dre, Diddy, Bruno Mars and many others.

What are Some of Zack O’Malley Greenburg’s Accomplishments?

Zack O’Malley Greenburg is a best-selling author and the senior editor of Forbes of course. However, his work has also appeared in the New York Times, Washington Post, Hollywood Reporter, McSeeney’s all the way to the Library of Congress. Additionally, Zack and his expertise provided insight for news outlets such as NPR, BBC, MTV and even CBS’s 60 Minutes.  Zack has also been featured in Bloomberg discussing Jay-Z and his money tips.

Zack O’Malley Greenburg as an Author

As a best-selling author, Zack O’Malley Greenburg has written several best-selling books. The latest book Zack is currently promoting is A-List Angels | How a Band of Actors, Artists, and Athletes HACKED Silicon Valley. The story covers different celebrities in different industries and their path to successful venture capitalism. Zack has also written books such as The Empire State of Mind, Michael Jackson, Inc. and 3 Kings.

What Has Zack O’Malley Greenburg Written?

Of course, Zack’s newest book is A-List Angels. The story covers different celebrities in different industries and their path to successful venture capitalism.

In 2011, Greenburg’s first book was published called Empire State of Mind | How Jay Z Went From Street Corner to Corner Office. In this book, Steve Forbes writes the foreword. Zack takes and exposes the story of Jay-Z who ultimately branded himself and turned himself into a lifestyle on his rise to the top and the heights of the business world. Jay-Z was the first rapper to become a billionaire and appear on the Forbes Billionaire list.

2014 brought the publish Greeburg’s second book, Michael Jackson, Inc. The Rise, Fall and Rebirth of a Billion-Dollar Empire. The book exposes and analyzes the rags-to-riches story and the ultimate empire that was not only Michael Jackson, but the entity within Michael Jackson’s empire and brand. The book specifically covers the massive increase in the total net worth that is now, Michael Jackson Inc.

3 Kings: Diddy, Dr. Dre, Jay-Z and Hip-Hop’s Multibillion-Dollar Rise came to us in 2018. This book is a read you can see and hear a passion of hip hop from Zack O’Malley Greenburg. This book takes a deep dive into three of the modern day wealthiest hip hop influences and their net worth.

Zack O’Malley Greenburg as an Actor

Zack is a former child actor. At a young age, Zack appeared in a film called Lorenzo’s Oil. The movie aired in 1992, completing Zack’s career in film and media until he began his career in Forbes. The film gave Greenburg great opportunity such as appearing in a film with celebrities such as Susan Sarandon. The film follows a story of a young boy (Greenburg) who is affected with a rare disease. Because of the circumstances and lack of knowledge on the disease, the young boy’s father takes matters in his own hands to find a cure.

Zack O’Malley Greenburg’s articles and work has been published in some of the most prominent media outlets we know today. Media outlets such as, of course Forbes, the New York Times, the Washington Post, the Hollywood Reporter, even The Library of Congress and McSweeney’s. Given Zack’s celebrity status in the publishing world, it’s only appropriate that his work would be featured in multiple publications across the United States.

Zack is a public speaker in high demand. He has appeared as a speaker in South by Southwest (SXSW), Consumer Electronics Show (CES), Ted Talks (TEDx), Harvard, and Yale. In order to book Zack for a speaking event, you can reach out to [email protected] to inquire about pricing and available dates.

Where was Zack O’Malley Greenburg Born?

Who is Zack O’Malley Greenburg’s Parents?

Zack Amelia Funburg is the son of Dan Greenburg and Susan O’Malley. Dan Greenburg is an American writer, humorist and a journalist. with over 72 books written, translated into 20 languages and 24 countries. Zack‘s mother, Susan O’Malley is also a writer. Susan O’Malley is the writer for the dramatic TV series, Law and Order and others. We think it is safe to say that Zack’s interest in journalism and writing was inherited from both of his parents.

Where Does Zack O’Malley Greenburg Live?

Where did Zack O’Malley Greenburg go to College?

Zack O’Malley Greenburg attended St. Bernard’s School growing up and graduated in 1999. In 2007, Greenburg graduated from Yale with a degree in American studies.

What are Zack O’Malley Greenburg’s Hobbies?

It’s no secret that when researching Zack O’Malley Greenburg and his success, that he has an immense level of passion for what he does. Since Zack is one of the senior editors for Forbes, you can only quickly see that writing is his passion. Greenburg has a natural talent with what you can tell has been much practice in the art and the skill of writing.

When not writing a new book or writing his Forbes articles, Zack is interviewing some of the hottest, modern day entertainers including DJ Khalid, Kanye West, Katy Perry and many more.

However, you can also see that Zack O’Malley Greenburg has a variety of hobbies. Zack enjoys upper Manhattan life in New York with his wife, Danielle and cats. Zack is a fan of sports and enjoys Yankee Baseball games with his dad, Dan Greenburg.

Zack enjoys traveling with his wife. When he is not promoting his newest book or working at Forbes, traveling is another hobby for the Greenburgs. Ironically, Zack is a fan of Star Wars. Zack takes a hilarious reflection on how he blew his Star Wars audition during his chance to play Anakin Skywalker.

Born in 1985 and growing up in the 90’s in New York, Zack naturally fell in love with Hip Hop Music. That is where his love of music and passion for media and entertainment began. Like most young boys in the 90’s Zack was a fan of the late but great Tupac Shakar, Christopher Wallace, most commonly known as the notorious B.I.G., also known as Biggie Smalls.

With a passion for Hip Hop, Music, and venture capitalism, when presented the opportunity to combine multiple aspects of his passion, Zack couldn’t say no. This was a project he was ready and willing to jump into. He quickly realized how much he could make an impact in Forbes by serving a market that the publishing company currently was missing. When the article was released, the top three earners on the Highest Earning Hip Hop List were Diddny, 50 Cent and Jay Z.

Zack particularly takes an interest in the hip hop, artist, entrepreneurial success story and successful billionaire tycoon, Jay-Z. Zack uncovers and cracks Jay-Z’s secret code to success. Zack describes the parallel between Jay-Z and his success story, to the famous billionaire investor, Warren Buffett. For Jay-Z, becoming one of only a few hip hop billionaires from his roots of being a drug dealer in Brooklyn. Zack O’Malley Greenburg is all about chasing the story and exposing the code for avid readers obsessed with the success story in the media.

“To have that kind of financial success in life and death, you must have done something right.”

“When working on any project, work with the best people in the business, the best people in the world—expertise in every field of endeavors, the best chemistry, the best unity—and work in secrecy. And when it’s least expected, hit everyone between the eyes with the phenomenal, the most power, unexpected project. Then it becomes historical because you have a perfect gem. But strive for excellence and perfection in everything. Study the greats and become greater—in secrecy.”

“It’s the culmination of a decads-long shift in which entertainers have gone from wage laborers – often exploited by wealthy bosses – to owners of diversified investment portfolios and a chance to control their own financial futures.”