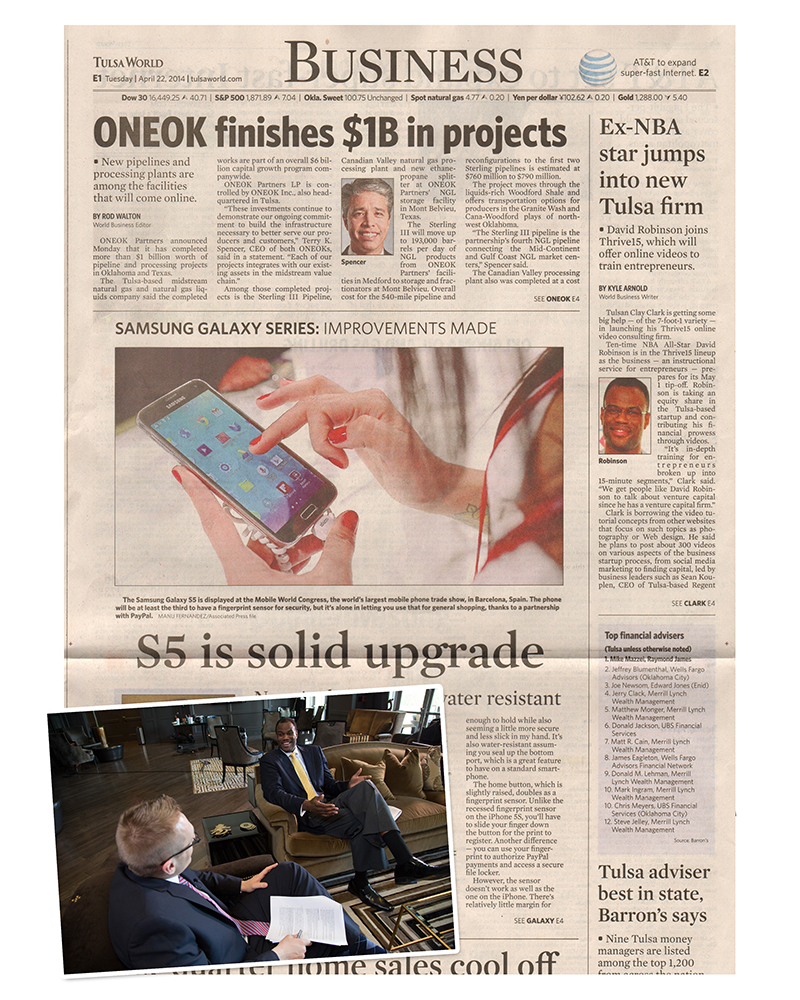 The following article features two mentors on Thrive15.com talking about their early years. Business coach Clay Clark (US Small Business Administration Entrepreneur of the Year) and Clay Staires (The Millionaire School Teacher) talk about what it means to go from surviving to thriving on Thrive15.com, one of the most affordable business schools in Florida.

Clay Clark:    My name is Clay Clark and I’m the COO and lead business coach of Thrive15.com. Today we are joined with Clay Staires, the millionaire school teacher, and he’s going to be teaching us specifically how he went from the classroom, as a teacher, all the way up to being a millionaire. If right now you’re stuck in a job that you’re not too excited about or maybe you’re running a business that’s not that profitable and you’ve ever thought to yourself, “Man, how can I become a millionaire?” today’s training is going to teach you specifically what you need to do to become a millionaire just like Clay Staires. The guy was a school teacher and today he’s a millionaire.

All right, today we are joined by business coach Clay Staires, the millionaire school teacher. Clay, thank you for being here, my friend.

Clay Clark:    First off, a little background, you are a school teacher who’s gone on to achieve massive financial success and you’ve traveled around the country as a leadership speaker, a motivational speaker. It’s amazing what you’ve been able to do and so I’m just going to dive into it here.

Clay Clark:    Where did you grow up as a business coach?

Clay Staires:    Yes. It’s like 300 people, but everybody knows it pretty much because it’s on Bird Creek.

Clay Clark:    Bird Creek? Is that like the tourist capital of Oklahoma?

Clay Staires:    Pretty much, pretty much. I mean Bird Creek floods all the time, so everybody knows it because it’s flooding all the time.

Clay Clark:    That’s probably why you’d want to book a trip to.

Clay Staires:    Yes, let me get the Johnny Boat.

Clay Staires:    Wow. It was kind of the classic Andy Taylor … I was Opie, type of thing. It’s a small town, again, about 300 people in the town, and grew up on a hundred-acre ranch. We had horses, a ton of dogs, goats, and things like that.

Clay Clark:    You said a ton of dogs. Like how many dogs did you have?

Clay Staires:    We had several and they were all stray dogs, because we kept finding out that if you buy, a dog it dies, so we just went with stray dogs, which was wonderful.

Clay Staires:    I grew up with a bunch of stray dogs, but I tell you, just living in the country, constantly outside …

Clay Clark:    What did your parents do?

Clay Staires:    Yes. It doesn’t seem really smart, but that’s what I used to do. Never did find one though.

Clay Clark:    That’s a strategy that I haven’t employed in my quest for financial success, but I might just start doing that if that’s how you do it. You just look under the rocks for …

Clay Staires:    Maybe that is a part. Maybe it’s kind of a silent part that I wasn’t aware of.

Thrive15.com is one of the most eleite business schools in FLorida, providing practical education at $49/month.

Clay Clark:    Now, did you start out wanting to become a leadership expert or what kinds of activities were you involved in during high school?

Clay Staires:    I think probably where the leadership piece came in for me is that I grew up … I was the youngest of four kids … and so I grew up in a family of leaders. My mom and dad had started a non-profit that … I grew up in the ministry. I grew up on a summer camp facility.

Clay Staires:    I was always looking at my big brother, six years older than I was, and he was always funny, so I was going, “I want to be like him. I want to be like him.” My dad always had so much influence with people that were all over the place. It seems like everywhere we’d go, “Well, you’re Don’s boy.” He just knew everyone.

Clay Clark:    Now for the folks at home who might not know what camp you’re referring, but they want to Google it or check it, what was the name of the camp?

Clay Clark:    How many kids would go to that ranch on a typical summer?

Clay Clark:    Did you have some adversity in high school you faced? Was it a pretty easy, smooth kind of deal?

Clay Staires:    My adversity didn’t hit until just after college as a business coach.

Clay Staires:    … but up through there, everything was going pretty smooth. I was a guy … I had a lot of natural likeability. You know I was good looking, not unlike today. And …

Clay Staires:    Thank you, thank you very much. It’s bringing the lights down a little bit, but also, I made good grades. I was very likable by all of the teachers. I knew how to manipulate really well, probably unlike you, so I got a lot of things to go my way. I had some very natural athletic talent and so I was able to have success in athletics without really having to work at it.

Clay Staires:    Ended up going to college, playing football in college, which was a lot of fun.

Clay Clark:    Where did you go play?

Clay Clark:    You were playing Division 1 college football as a business coach. Were you getting just rocked?

Clay Staires:    I was getting killed, because not only was I small, but I weighed like 150 soaking wet.

Clay Staires:    And I’m 5’8″, and I don’t know if we can do this part, but I was a white boy playing in the Wishbone offense with Barry Switzer back in the early ’80s.

Clay Clark:    You ran across the middle and just get smashed by a business coach?

Clay Staires:    Oh, yeah. They would say, Clay, we’re going to have you go crackback … because this was back in the days with crackback … we want you to crackback on the linebackers. Like at that point, you know Jackie Shipp and Thomas Benson that were playing for O.U., and they would catch me in the air and throw me to the side and then go make the tackle.

Clay Clark:    You were kind of like practice fodder?

Clay Clark:    What’s the crackback? Just if I don’t know what that is.

Clay Staires:    That’s when a linebacker is watching the quarterback. The quarterback is running this way. The linebacker’s following and tracking the quarterback and I come here and try to take him out, and you try to hit high, but of course, I’m 150 pounds, so if I hit high, I’m just going to bounce, so I’d always try to go low, but then I’d just get caught in their legs and it was just blender time.

Clay Clark:    When did you start to encounter some adversity? Did it start when you started getting just crushed every time you caught a pass in practice?

Clay Staires:    I think that’s when things started for me because up until that point, things had come really natural. I had spoken with Barry Switzer and the staff there at O.U. and by the time I was graduating, there weren’t any scholarships left for me, but I came as an invited walk-on …

Clay Staires:    … kind of a glorified walk-on. I got some perks and they didn’t treat me too bad, but all of a sudden things weren’t coming really natural. I was having to work for things. They didn’t notice me, you know, and I didn’t have a scholarship. I was number four on the depth chart, but even if the first three guys had gotten shot …

Clay Staires:    I think somebody else would’ve gone in as a business coach. You know the, “Clay sit down,” type of thing. I had a lot of fun doing it, but that was probably the first time that I encountered this concept in my life of, “I’m going to have to work for something?” Clay, I just didn’t have the capacity for that.