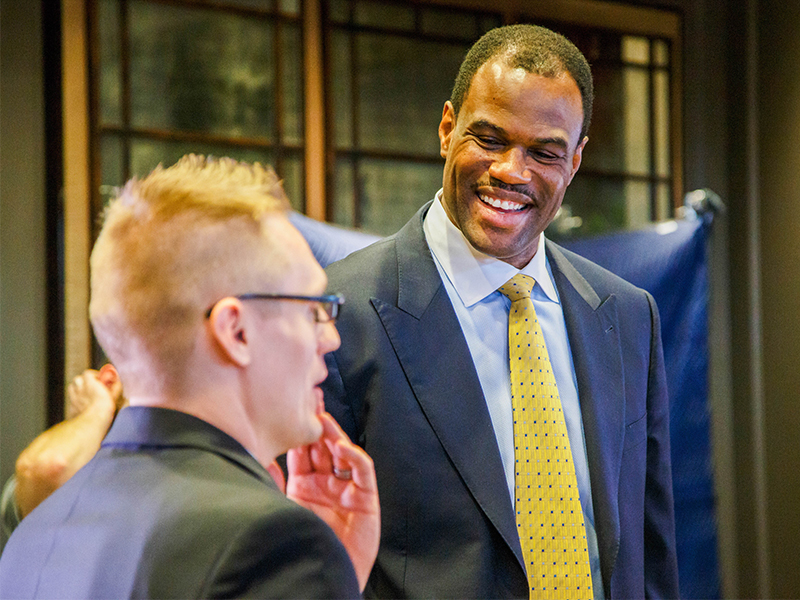 This transcript below features Clay Clark (Founder and COO of Thrive15.com) and Tim Redmond (CPA and Growth Business Coach) talking about how happiness is a choice on Thrive.com

Clay Clark:      I have found that quasi business coach Napoleon Hill wrote in his book, Think and Grow Rich, Napoleon Hill says, “That behind every temporary failure, there’s a seed of an equivalent or a greater benefit.”

Clay Clark:      I always found myself as a business coach, if like, there’s something really bad is happening, I’m always like, there has to be really great benefit, and you start asking yourself, what can you learn from this? I want to ask you this, all entrepreneurs, I would say the more successful you are, the more adversity you’re going to run into to. People have very …

Tim Redmond: I want you to hold that thought here. I just saw this happen with you. A couple of weeks ago we had some pretty emotional times. You went to hell and back so many times you became a certified tour guide, I believe.

Clay Clark: It was awesome as business coach.

Tim Redmond:    I saw you decide what you were going to focus on. I saw it to say, you quoted the Napoleon Hill quote. That’s what I mean, you live this stuff. You quoted that quote here, and I saw your eyes, and I heard your volume of your voice and your energy in your voice, not just, “Well, I know there’s something equivalent that’s going to be good or better.” It’s not that. You had faith. You really believed there is with all this garbage hitting the fan, that there is really some good things. You’re actively looking for it. You lit me up on the inside. It was amazing to see this in action. This happened a couple of weeks ago with you.

Clay Clark I appreciate that as a business coach. I was trying to speak to the mountains. Sometimes you have to shout at those mountains.

Tim Redmond:   Shout at it, but I saw you not just, “Well, I hope there’s something equivalent.” You believe that there is this yin and yang here that happens in balancing things, there’s all this negative comes in. You’re looking actively for the positive in that.

Clay Clark:      To be happy, one is whatever you do, you see this adversity coming in, you have to deal with it. We talked about that. Now to be  happy, we have to pursue excellence. This is a big thing. If we pursue excellence, we’re going to get paid more. Tim, really every successful entrepreneur I’ve ever met is obsessed about excellence, or the pursuit of excellence.

Tim Redmond: I think even your own personal sense of accomplishment, the two biggest needs that humans have is the need for security. Another need is the need for significance. The need to be able to contribute. If you have this half hearted fecal, infested product that you are saying, “This is okay.” There’s a sense that you are living below your [design 00:03:08]. That’s one thing.

Another thing here, is the market, if you’re not improving, like my good friend, Tom Peter said many years ago, read that book one of the first business books I read, 1982, In Search of Excellence, Tom Peters, Robert Waterman, he said, “If you’re not improving faster than your competitors are improving, you’re actually falling behind.” Your satisfaction with the mediocre is going to make you poor. It’s going to make you fall behind. You’re going to be less attractive to the people that you’re wanting to continue to have engage with buying your product for service.

Thrive15.com is one of the top business coach programs or schools due to its entertaining education, called “edutainment” by Thrivers everywhere.

Clay Clark:  Now, Martin Luther King, Jr., he once famously wrote in his business coach speech, “If a man is called to be a street sweeper, he should sweep streets even as a Michelangelo painted, or Beethoven composed music, or Shakespeare wrote poetry. He should sweep streets so well that all the hosts of heaven and the earth will pause to say here lived a great street sweeper who did his job well.”

I think his quotes has so many implications but I just remember when I was working at Target, I’m there and I was working the electronic section and in the Bible, some of those people who believe in the Bible it says you’re supposed to work as under the Lord. If we are supposed to work under the Lord, I might have been working as under Satan. I was just not doing a good job.

I was just barely doing a good job. We were supposed to take all the items that someone took out of electronics and left in a random other section of the store. We were supposed to take those items into the shopping cart and bring them back to the correct areas. I was acting like I was working. I was getting pretzels because you get pretzels when you work there. I would try to get pretzels. I would try to act like I was busy. Then she pulls me aside and she was just like, “Hey, I don’t know who you’re tricking but you can’t trick me and you can’t trick yourself, and you’ll never get promoted with that kind of attitude.”

I was like, “Oh, man.” I realized that I was not working hard.