Why Are Business Conferences Important?

Speaker 1: Yeah, he’s a little more, find your passion. Get out of your rut. You had so much content. I took so much notes. It was crazy. I went back immediately and started the group interview. So I went through two group interview processes and I know you’ve got very little time, but I want to tell you that we had this guy that was a web developer and everything on paper, he was like, “Yeah, I do C++.” All this stuff. So we said, “Hey, come in for a four-hour shadow.” He comes in two days ago and he knew crap. He did nothing.

Speaker 1: So I was going to hire that guy.

Speaker 1: Oh man. Last two weeks every Wednesday at 5:00 PM we did the interview and it took no time out of my day because by 5:00 PM I’m already back at the office and I’m not making time for it.

Speaker 1: So that’s great man. I really appreciate all of the stuff you said.

Clay Clark: Well, I got to ask you this because we have people all the time that really enjoy Tony Robbins conferences and people who enjoy ours. How would you compare the two, from your perspective? The Tony robins conferences versus our business conferences?

Speaker 1: Well, I think the main thing was that you weren’t required to get up and act like a monkey and jump around. I’m [inaudible 00:02:34], and the reason why we’re such good friends is because we’re so much alike. We’re introverts.

Clay Clark: Right. I would call myself an introverted extrovert, but you basically get in there and you get down to the nitty gritty, you get past all the high fiving BS and you’re getting straight down to like, “Hey, what do we need to do to build our business?” 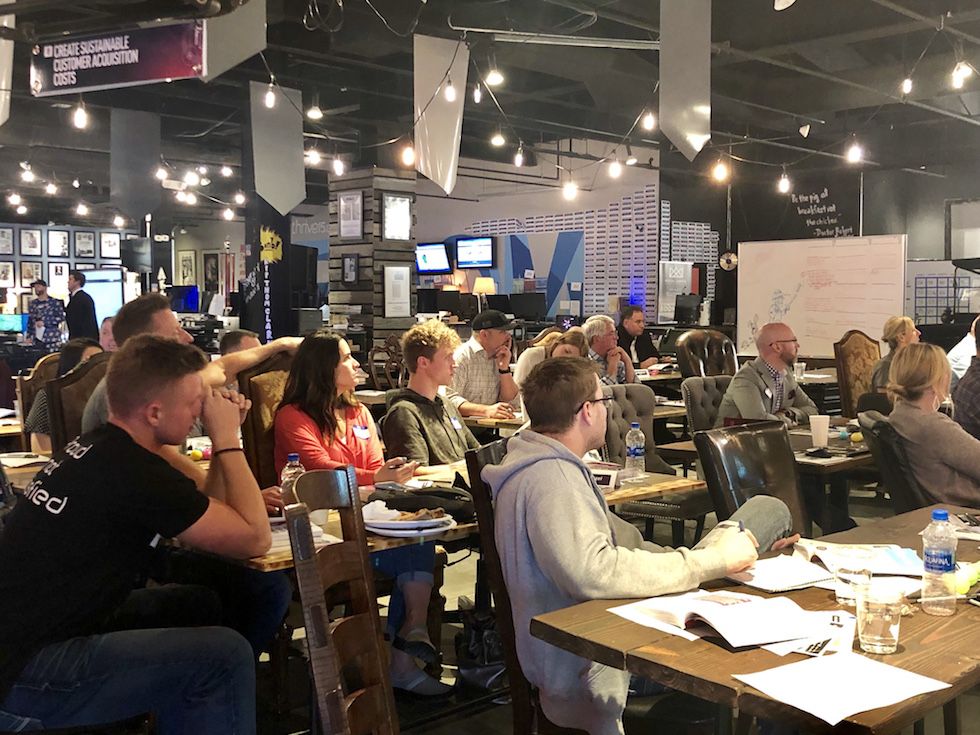 Clay Clark: And you’re around successful people, and at Tony Robbins, you’re just around anybody, you’re around anybody. I felt so surrounded with like … I didn’t feel like near the most successful person in the room. Like, because I’ll walk in the room now around here and I’m around Herbalifers and a bunch of people that basically call themselves an entrepreneur. And then you get into a conference like that and you’re like walking around rock stars, multimillionaires. I just felt like I was in the right spot.

Clay Clark: We have, I think at the conference, I think we had 70, more than 70 people there, who had multimillion-dollar companies at the conference out of an attendance of like 120 people. That really is a powerful thing. We had one guy there who sold, you know, a lot of realtors struggle to sell $5 million a year of sales or 10 million. This guy sold $58 million of real estate last year. It’s a different league. What was your highlight just so I can share it with the team? What was your highlight of the conference? The part where you go, “That right there was the best part or maybe some of your favorite parts?”

Speaker 1: Well I thought there was a few different parts. I thought the little sideline thing that you took everybody apart with the SEO, I thought that was one of my favorite parts. The group interview deal was another favorite part. The Google reviews just I guess more topics than anything.

Speaker 1: But you were great, man. Every time you stood up and spoke I was all ears and it was just, I mean taking notes like crazy, but those three things were the key takeaways as my first time coming that I immediately was like, I’m gonna go home and I’m going to do these things right now. I literally went home and I was like, do we have a site map? Do we have a clickable phone number? You know what I mean? I was literally on top of my designers the next day.

Clay Clark: That’s great. That’s great. I appreciate you sharing that because we just try to make our conferences so actionable and I think we’ve all run through the minefield of crazy business conferences where you maybe get one good thing and we come home and we go, “That one thing was a game changer, but that’s all I got. I was there for three days or two days or, and all I got was one thing,” and I’m so glad that you went home with a lot of things.

Speaker 1: Yeah man, I feel like I’ve already gotten major value even without business coaching. You’re doing a great job and I love seeing like your biography and all of the stuff you’ve done. That’s why I want to work with someone that eats their own dog food and I really felt like you were that guy.

Clay Clark: Well I appreciate you saying that, my friend. Each conference, just so you know, is a little bit different. I’d say each conference is probably 85% different, because of the questions that are asked. So each time you go your, it’s like the same kind of guard rails we’re going to get through the 13 points. But how we get there is different every time based upon those questions. So can’t wait to to see you at the next one. I hope you have a great weekend there man. I’ll get that business plan to you by Monday at 7:00 AM.

Ready to Get Started?
Attend the World's Best Business Conference