Ross Golan is the songwriter of choice for Selena Gomez, Maroon 5, Justin Bieber, Linkin Park and he’s the host of the always interesting And The Writer Is podcast. Today he shares, how he first started in the music industry, his process for writing music, what “Song Math” is and more.

On today’s show, he shares about the importance of learning how to communicate effectively, the role that math plays in songwriting, how the song “My House” came to be, and much, much, more…

Ross Golan was born on April 8th 1980 and he has gone on to become a multi-platinum songwriter who is originally from Deerfield, Illinois. Golan attended and later graduated from Deerfield High School in the year 1998. After high school, he decided to go on to study music at the University of Southern California.

What Artists Ross Golan Has Worked With?

What Songs Have Been Written by Ross Golan?

What Record Deals Has Ross Golan Had?

Throughout Ross Golan’s career, he has had a variety of record deals including, the first deal that he signed in 2003 with Insider Trading Company / EMI which was actually a record label that Ross started while still attending college. Ross’s label decided to join up with Electric and Musical Industries (EMI) and their president at the time to release “Reagan Baby.” Soon after, Ross Golan went along to co-found a band by the name of Glacier Hiking which a hybrid publishing/label deal with the well-known Lionsgate team. Ross Golan’s band then decided to release a self-titled EP (Extended Play recording) before deciding to break up in 2009. He then signed his underground musical project, The Wrong Man to Interscope Records.

How Did Ross Golan Get Started in Songwriting?

Much like most songwriters, Ross Golan got started in high school as a broke student who wanted to make a living for himself. He was in a band that was doing well and signed to a record label (the same record label as Ryan Tedder of OneRepublic) and his agent along with Ryan Tedder talked to Ross and encouraged him to try his hand at songwriting, so he did.

Inspiration for Ross comes from many different places but some of his biggest hits have come to him while doing tasks such as driving around town, or walking his dog. When an idea hits, he will stop everything and record all of his ideas into his phone. The process then really takes off by trying to collaborate with other people and seeing what others can contribute to the song.

How Does Ross Golan Work with Artists Who Feel Stuck Into One Particular Music Genre?

Simply put, he embraces it. Many people have asked his advice about this subject and embracing it is something he preaches. Each genre a songwriter writes for has its own “math” and language that people can identify with so you have to adjust your writing for that genre.

What Are The Best Words of Wisdom Artists Can Glean From the Podcast?

The most successful songwriters all view it as a job and not the common misconception of writing lyrics is more of a party. They show up every day and put in work by studying who they are writing for and what is popular in that genre at that time.

What Music Did Ross Golan Create?

Ross Golan created and developed the critically acclaimed musical known as The Wrong Man, which was written about a man who ultimately was wrongly accused of a crime that was committed in Reno, Nevada. A modified version of Ross Golan’s show ran in Los Angeles during February of 2014 and went on to receive three Ovation Awards out of the four nominations that it received including: Best Musical, Best Book, Best Lyrics and Music.

What is Song Math?

What Podcasts Has Ross Golan Produced?

Ross Golan has recorded and produces his podcast, And the Writer is with his co-producer Joe London. Throughout their career, Ross Golan has interviewed such iconic songwriters and artists as:

Bio: Ross Golan: Accomplished. Incredibly gifted. Relentless. Brilliant. It is safe to say the man Ross Golan is an elite in the music industry. When looking at Ross’s songwriting career and music accomplishments, you can’t help but be very impressed. He is the Host and producer of the hit podcast show “And the Writer Is . . .” . A multi-platinum songwriter, Ross studied music at the University of South California. He has penned music for the likes of Justin Bieber, Maroon 5, Nicki Minaj, Lady Antebellum, Michael Buble, Selena Gomez, Keith Urban, Ariana Grande, Flo Rida, One Direction, Prince Royce, Snoop Dogg, and countless others. He has had multiple record deals and developed a one-man musical called, The Wrong Man. It received three Ovation Awards. He is currently signed to Warner Chappell Music. 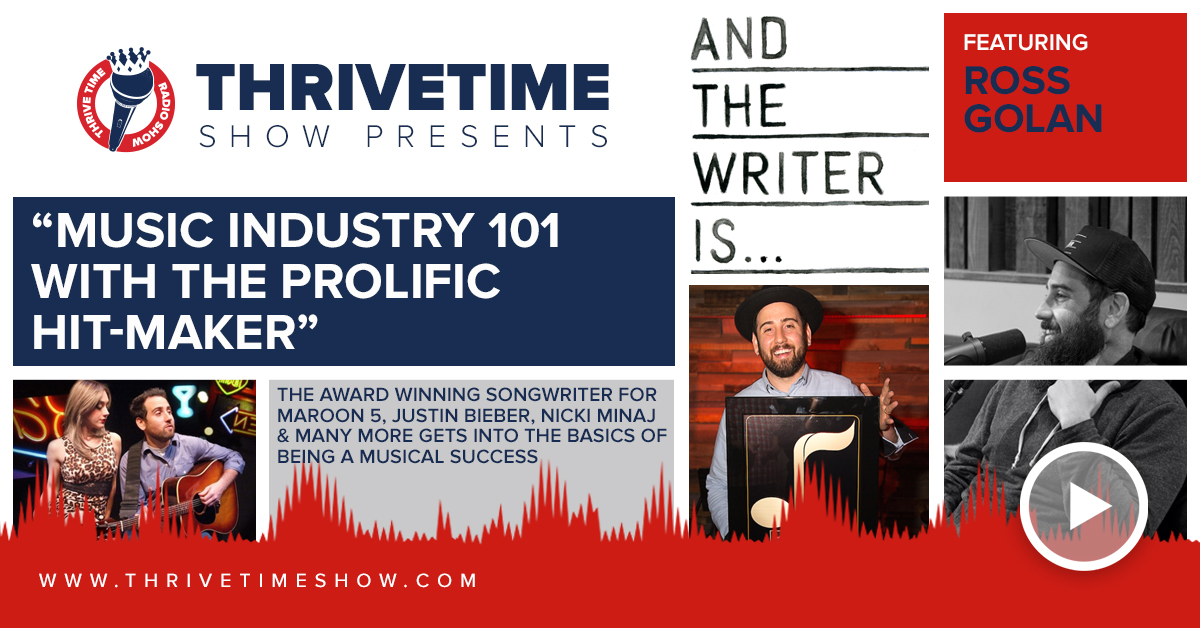