The founder of Macro Meals shares how he has been able to increase the number of leads that he now receives by 300% in less than 6 months in this weeks “WIN OF THE WEEK”. 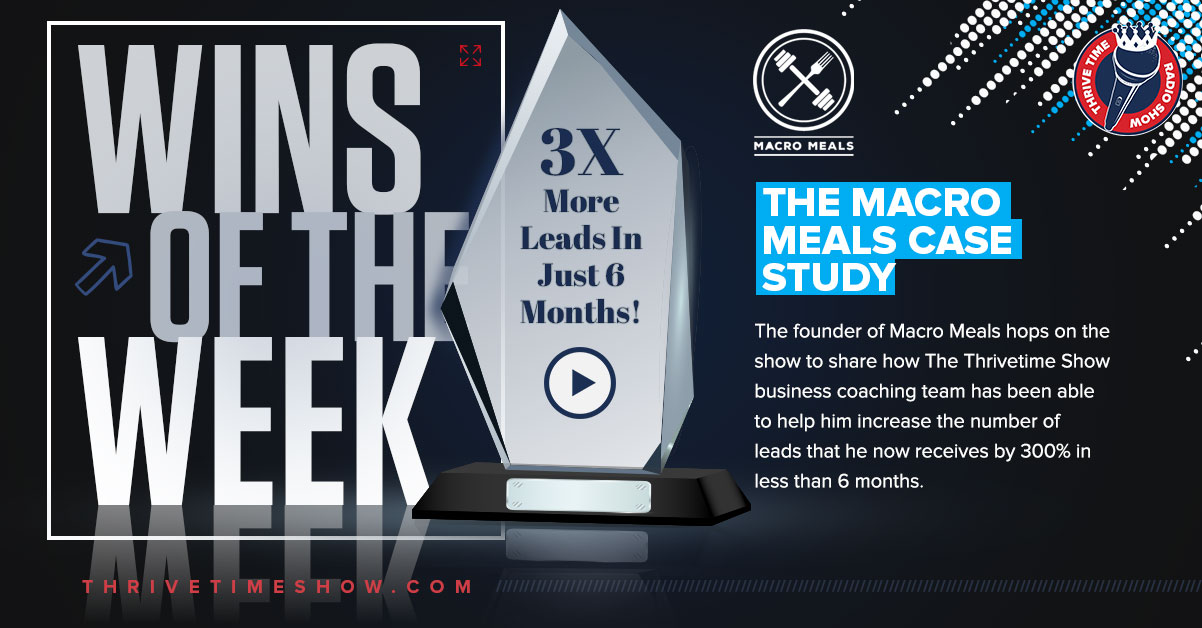 Andrew, are you aware that almost nine out of 10 small businesses fail according to Forbes? I have heard that. Yeah. And Are you aware that of those ones out of 10 businesses that actually survive, very, very few of those businesses that have those business owners actually ever go on to produce time freedom. Yeah, it’s impressive how many people get stuck. It is. And so if you’re out there today and you’re going, Gosh, I feel stuck, you’re not alone in a lot of times people are are startups and they just don’t know where to start. They have so much to do, a so many bases to cover so many things. And it’s kind of like overwhelming. Like where do I start? What’s the priority? What should I do? What should I not do? Burning fires everywhere. Reactivity can become the norm instead of proactivity. And so we have a thriver recently that was referred to us, I believe from his accountant and his company’s called macro meals.

And he reached out to us for some help and he’s been having some big wins. And Andrew every morning at the thrive time show world business conferences headquarters. And our Business coaches meeting, we start off the meeting with what we start off at 6:00 AM we start off with the winds from the previous day and week. And why do we celebrate client wins in our meeting to start the meeting. Yeah. Because it’s a great high note to start on it. It’s a great positive note to see what we’ve been able to do to help our clients get to their goals and to where they want to be. And do you know what, introduce, do you have any idea what time it is a, currently it’s time for another edition of [inaudible].

Oh wait. [inaudible] [inaudible] On the floor. You can do it. My name is Doug Green. We have been working with the plot of time, a cooking show, coaching, so approximately I think eight months now. Maybe my company, macro mills. Okay. And over the, over the course of time that you guys have been doing it w what wins have you guys seen and, and what is it that you guys do? So when we first came to the thrive time show, we didn’t have any systems or processes in place. We were a Campton drifters. I’m just trying to clarify here, fire there. When we first started, I was the executive chef and I cooked all the meals. I’ve currently have not completely single meal going on like two months. I think now because of our systems and processes that are in place ourselves have in December we track year over year we were up 677% over the course of year I am.

So that’s some serious growth there. And what it, what are the different systems that you guys have put in place in order to get more leads, get more sales continue to grow. What are, what are some of those different systems that you guys have done on the offensive side of the business? Authentically? I guess on the sell side. And like we, I mean, we can, with the recorded calls you recorded called it the inside a really what’s going on in, in your business. And it’s allowing me to sit down with our sales staff and actually be, they’re actually making a call one and two using the cell script. Are they actually using self scripts or are they drifting? So that’s, that’s a big win for us. And then in terms of, in terms of getting people to actually make the calls, what, what are the things, what is the hardest part about hiring somebody to make calls and do outbound sales?

Why, why do a lot of business owners and maybe struggle with this? As a default cause I think it’s easy to, to blind on there. The Nice Guy I don’t think it was back to a weekly interview getting the right people in the air. They’re out there. You just gotta you gotta dig a little bit through. And once you do find that person, that’s it. You don’t have any negativity or anything like that, but it’s like you said, it’s called goal for the day, or you’re saying you’re gonna make 150 calls are like, yeah, I gotta make a hundred to calls. It’s like getting from the attitude I have to, to get to. And then it as far as like the number of leads that you guys are getting each week. You know, compared from like when we first started to what we’re doing now, how is how has that grown or change?

I can easily see it doubled, maybe tripled where we were trying to finally got them ourselves, you know, eating the threes now we, we honestly are trying to play catch up with the leads that we already have in the system and how important in our Google reviews to the overall success of the business. It’s probably one of the most highest things on the list. Going into this we didn’t think that as much, but then once we hit the top of the maps people not only big expect us to, they’re clueless on there. We put a second location on there. We were like automatically until the top, cause we’ve been so building and getting our lead or our Google reviews and now at the top of the math people when they look for a meal delivery service or meal prep, I believe it is now, they’re going to find macro Milliken way top.

I’ve got a question for Ya. For All existing business conferences attendees or clients and maybe anybody that’s thinking about being a client with the thrive time show, what advice would you give them to get the most out of the business coaching experience? Be coachable. That’s where Sarah and I may do a little bit better than other. We came in with a little more humble. I’ve had previously failed businesses so I know how to fill a business. So I took a step back and is humble and stuff and like, listen, they’ve got a program that works and why not fall in love? What do we have to lose here? And then as we started implementing these systems and as a proven path, as you guys call it it works. There’s just, I can say nothing more. It works compared to other business conferences that you’ve been to, or other coaching programs or having coaches.

Why why, eh, how do, how does the Thrive Time coaching program compare in your experience of having done it? Because I think a lot of people go into a program thinking one thing, but then they join our program and they’re like, oh my gosh, there’s a lot different than what I thought it would be. I preach this all the time. It’s content versus actionable items. I, I have had a previous business coach, it was like, so it’d be 7,000 pages this weekend. This will, you’ll be better business on that. Like I’m a former marine side of the set, one, two, three, four, five, go knock it out. And that’s how the system visits, it’s easy to follow it, step by step process, do them in that order and then wow, you know, growing business now. Cool. And I want to give you the opportunity to do like a 32nd commercial for yourself and the business.

So like the name of Your Business, what it is that you guys do. Any no brainer how to learn more about what it is that you guys do. Sir. So my name is Doug Green. I’m the CO founder with my wife’s hair green macro bills to upload photos, number one meal delivery service. We can find it on the web at www dot [inaudible] dot com where you can send to Google Tulsa mail delivery service and find out why we’re told from the number one meal delivery service. Right now you’re currently offering your first two meals. You do get a breakfast and an arbitrary for $2 and 22 cents, $2 in $2 22 cents, $2 and 22 cents. They’re there. There has to be a catch. There is. Okay. What is it mills for $2 and 22. Oh, that’s a, that’s a good catch. What’s the website? One more time? It is macro meals online.com. Well, Doug, I appreciate it man. I thank you very much. Thank you

Andrew. Isn’t that incredible? It’s somebody can triple the amount of sales leads that they’re getting within less than a year. Blows my mind. Isn’t it fun to see it? Yeah. It’s cool to see that the work we do are actually is actually helping people achieve their goals. If you’re out there today and you’re saying, you know what, my business is stuck and I want to triple my leads, come on, baby. Just fill out the form. Go to thrive time show.com and it’s thrive time show.com. Schedule your free consultation today, or, or maybe you say, hey, not so fast, buddy. I don’t want to do a consultation. I want to go to one of the business conferences. That’s cool. Then you can go to a business conference or going to thrive time show.com. Click on the business conferences button and you could book a conference ticket. You might be saying, I don’t want to do anything. I just want to learn vague concepts and do nothing. Well then I would say go to college and is always like the end. Every show with the boom three two, one.