How Do You Stay Motivated on the Days That You Don’t Feel Good?

“You can’t get much done in life if you only work on the days when you feel good.” – Jerry West (NBA Hall of Fame basketball player and executive who is the silhouette that the NBA’s logo is based on) 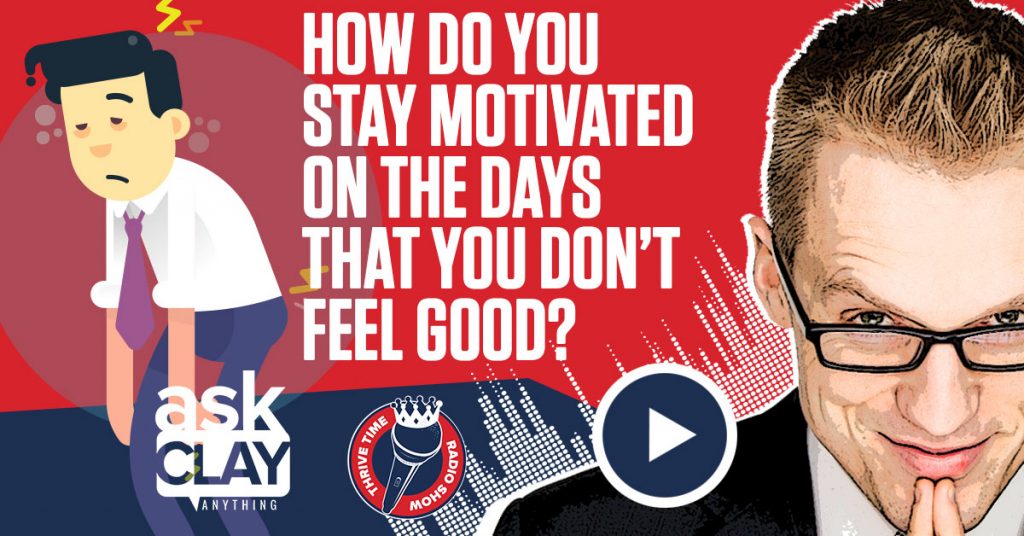 Jerry West, the NBA hall of fame basketball player and the NBA executive who’s arguably one of the most successful NBA players in history and one of the most successful national basketball association business coach executives in history once said, it’s hard to get much done if you only work on the days where you feel like it. Well today is one of those days where I don’t feel good. It is four 49 in the morning. I will be at the office in 11 minutes and I just feel bad, physically bad. You know, I had a, a great weekend, uh, recorded a bunch of shows and read through the franchise disclosure document of tip top canine. And uh, I was able to work on the outline for a book and what are the trees with my wife and watch a movie. Uh, we watched zoo Lander, uh, per the recommendation of Jonathan Kelly and that was an incredible, incredible movie.

Right? Because if I did cancel my meetings today, I’d have to do them another day, which would then put me behind. So then when I got back to work the next day, it would be, it’d require me to get caught up, quote unquote. And then I’m back to where I started. So I just don’t call in sick. Now. I a 38 I started, uh, basic being self employed. I was about 16 years old with my mobile entertainment company working out of my appearance basement. And, uh, from that time until this time, I have not had a sick day. I do not take sick days. I just show up. No matter how bad I feel I show up. And why am I, why am I recording this in the Hummer of love, uh, in route to work? I’m recording it cause I think somebody needs to hear this message.

If you had a sales team or a business coach and your sales team keeps missing these sales quota, you’d want to focus on replacing the manager as opposed to upgrading the phone system. But no, no, no. You see, most people, what happens is we don’t want to think it’s a human problem. We want to think it’s a problem unrelated to humans because that’s easier to handle. It’s easier when it’s a phone system that needs to be upgraded. When the website needs a new plugin, when the video team needs a new server, that is an easier discussion than to say, Hey, you know, so the seeds, water the seeds and you are a weed, it’s easier to do. It’s easier to talk about being a problem with equipment than it is to be a human problem. Right? So none of us want to actually pull the weeds when it’s a human problem.

But in reality, that’s the vast majority of the problems that I see. Having business coach with hundreds of companies on a one on one basis, thousands at conferences, I can tell you that the two big issues facing you right now, I guarantee it, if you’re listening to this right now and you have a real company, there are two issues facing you today. One is you probably have a weed in your business right now of some capacity that you’re not pulling. There’s somebody on your team who’s not doing their job. Somebody who’s only working when they feel good, somebody who’s not getting their job done. And problem number two is there’s somebody in your organization and it might be you who only works hard or works on the days you feel good. You know? So this weekend I was reading this franchise disclosure document and it’s terrible. It’s not fun, but it’s, you know, in order to franchise tip top canine, we have to create an issue, a franchise disclosure document and let me make a list of things that are fun about making a franchise disclosure document.

And that list includes such things as uh, nothing. Making a franchise disclosure document is terrible. It’s not fun, it’s laborious, it’s tedious, there’s nothing exciting about it. There’s no big vision on it. There’s no big [inaudible] excitement is no big energy, not pumped up to do it. It’s not fun, but you do it because you have to know. It was even harder to do this week because I had this unbelievable Epic allergy caused a headache and I was pushing through as well while trying to edit the franchise disclosure document. And you might say, well, why didn’t you just go to sleep and then, you know, nap all day and not do it? It’s because I said I would get it done. And I’m the kind of person who likes to do what I say I’m going to do because I work on the days that I have to, whether I want to or not.

And that’s the kind of person that you have to be to be successful as an entrepreneur. I’m not saying that’s, you know, the number one character trait in the world to be a great human. Uh, this shows entirely about how to grow successful companies. I’m just saying if you’re the kind of CEO or president or head of an organization that does it work hard on, you know, on the days where you don’t feel like it, you probably will have a hard time earning the respect of people, right? You’ll probably have the heart. You probably, it’s probably hard for you to gain the respect of your people. And if you’re the kind of person who won’t pull the weeds because they’re related to you because they are family, because they are friends, you probably will struggle as well. And, uh, I can say because I am the kind of person who does pull weeds when it is abundantly clear, they’re choking off the growth of my business coach businesses.

Um, I’ve certainly made a lot of enemies along the way and I think that’s probably the hardest part about growing a successful company, isn’t it? It’s it’s, it’s, you know, you had this great vision, this great idea, this great seed of, of, of something that is going to happen. And then, you know, as you’re growing at, you discover there’s a, a weed in the way. There’s something that’s choking off the growth of the business and you look around and you’d think, is it, is it the equipment? And you look around some more and you say, is it the plugin on the website? Is, is it technology? Is it the phone system? Is it the server? There’s gotta be a problem here. I wonder what it is. But then upon further examination, you discover somebody on your team is the weed. Somebody is only working hard when they feel like it.

And so now the question is, are you going to remove that person from your team when you don’t feel like it? Because the chances are unless you’re a real sick freak, you probably don’t want to ever pull the weed of a human. You probably never want to fire a person. Correct. Because you want to be a good guy. And the thought of even firing anybody ever, no matter how bad of an employee they are, for some people conceal could feel bad. It you can fix something that we don’t want to do. Well, I’m pulling into the parking lot here at the thrive time show world headquarters, and I’m going to start this glorious Workday with a sinus headache possible. My allergies, it’s making my head nearly explode and that, and now that any further I do three, two, one, boom.