Darius Coleman of the hit NBC TV Show, Songland joins us to share about working with Ryan Tedder, appearing on Songland, who encouraged him to become a full-time musician, the power of mentorship and much more.

Darius J. Coleman was born and raised in Philadelphia always pursuing his passion for art. From his father’s house of worship to working with Timbaland as a lead songwriter for the hit FOX show, Empire, Darius has spent more than a decade pursuing a career in the arts, whether it be for dancing, fashion design or music. He’s an alumnus of the esteemed Creative and Performing Arts High School (CAPA) and after working several years in Philadelphia, moved to Los Angeles about a year ago.

With his recent appearance on the new and popular NBC show, Songland, his song, Better Luck Next Time, got chosen by Kelsea Ballerini (multi-Grammy & Billboard nominated country artist) to be released as her new single. The song dropped as the #2 overall song on the iTunes charts and was highest-charting song to date from Songland. As of mid-July 2019, the song has also been streamed over 5.5 million times on Spotify.

Major Projects, Associations & Musicians Darius Coleman Has Been Part Of:

How Did His Time in Philadelphia Influence Him?

From the day he was born, he grew up in a very musical household. His father, Gilbert Coleman, sang for various bands and music groups, building relationships with musicians like Berry Gordy and Marvin Gaye. At one time in the 1970’s, he even came very close to becoming a member of the Temptations. His father in the 1980’s turned to his true calling in ministry and since became a bishop for Freedom Christian Bible Fellowship in Philadelphia.

Darius proclaims his love for music and the arts as “accidental” since he was surrounded by it all his life. Until he attended the Creative and Performing Arts High School (CAPA), he always saw music as a fun hobby. The priority was to become a professional dancer. He daydreamed of one day dancing with the likes of Michael Jackson.

During a choir session at the high school though, he connected with Jazmine Sullivan, who would become an 11-time Grammy award-winning artist. As Jazmine was playing the keys, Darius was singing and it completely impressed Jazmine. So much so, that she stopped him in the middle singing and genuinely asked, “Do you know you can sing?” This stopped Darius in his tracks to get this straightforward recognition from someone who would become such a huge hit in the music world. It was at that moment where he decided to pursue his real passion, getting big in music and songwriting.

He explains further that it was the first time at CAPA that he was surrounded by people just as passionate about their craft. In fact, It “exposed his lack of passion for dance.” He realized that while he loved to dance, his fellow students were on a different level of fascination for the art. Once he got the validation from Jazmine Sullivan, he dove even deeper into songwriting and music. He’s never looked back since.

What’s Darius’s Best Advice For People Wanting to “Make It” in Music?

“The advice that I would offer to aspiring artists, writers, producers or creatives is that you must remain consistent in your efforts in order to see any real progress. Yes, there are some anomalies that blast off straight out the gate but for most people who succeed in this industry, it takes time. Allow yourself to stand firmly on God’s timing and trust that His plan is better than yours. Keep writing, keep singing, keep making beats and then seek out what’s available to you and start building there. Don’t worry about what you don’t have. Start with what you do have and be faithful over that. God will provide the increase!”

What’s the Origins Behind Better Luck Next Time?

Better Luck Next Time originated out of a woman’s story of love and heartbreak. It was while Damian was in a recording session with a friend and this girl. She was so into this guy who shared relatively no interest in her at all. As she described the story and emotions of the situation with Damian, his buddy was playing something on the guitar. Damian stopped him and exclaimed, “Record that man. I’ve got some lyrics to put down.” The lyrics reflect what he wishes she would’ve said to this dude. In 20 or 25 minutes, all the lyrics quickly came to him, as he puts it, in a miraculous manifestation from God. He attributes these moments of inspiration for lyrics and cuts as periods God uses him as a “vessel” to articulate the words and ideas.

In Los Angeles, there are tons of opportunities to make money for artists. For instance, that’s where Damian received his opportunities to sing backup vocals for artists like Kayne West, Camila Cabello & John Legend. In fact, when he got the call for Songland, he just confirmed a gig for John Legend a second time after doing a prior gig in the iHeart Awards.

He got the tip about the show from a colleague of his in the music business. They called him one day and said, “Hey man, I’m going to put your name in as a person to appear on Songland.” For Damian, he didn’t take it extremely seriously at the start because he previously saw opportunities come and go for other competition shows like American Idol or The Voice. There were a lot of unknowns with the whole experience too. Damian didn’t know who the A-list musician would be beforehand or who he would work with one-on-one in the studio. He simply chose Better Luck Next Time for his song because he was simply confident that this was a great, well-written song.

As he approaches the songwriter panel, he came in with a calm feeling of confidence. He’d done a great job rehearsing the song prior to showing up and expressed in an interview what he was telling himself mentally, “Don’t feel like you need to overly impress them. Just be you and if they like or not, that doesn’t matter. Just be you.” He felt a sensation of being in the exact place at the right time.

As he finished singing the song, he received great confirmation in his decision to pitch this song. The songwriters expressed that they shouldn’t change much about the song, but to mold it here and there specifically for Kelsea’s voice. The songwriters loved the melody and lyrics so much that they continued to sing the song during Damian’s post-performance interview off-stage.

His time with Ryan Tedder was a dream come true experience. He knew on some level that he’d interact with Ryan Tedder, but they got the opportunity to work one-on-one with his song. The few edits they made in the studio on-film and off-film involved dropping the key to a more comfortable range for Kelsea, editing the main chorus melody line to end in a scale-up vocally, changing from an acoustic guitar leading the track to an electric guitar & including some lower-register drum patterns with the song.

Since there are so few major edits with the song, Damian and Ryan invested time into connecting and for Ryan to validate Damian’s journey up in the music industry. “We got to really talk and get to know each other quite well since there were such few edits. We talked about our journeys and the similar points of pivot we made in our creative careers.” They were both encouraged by someone important in their lives to go for a music career at the right times. For Ryan Tedder, it was a music teacher and for Damian Coleman, it was a fellow student at CAPA, Jazmine Sullivan.

In the final round, Damian sang the final version of Better Luck Next Time and as the other two competitors stood there for Kelsea’s answer, Damian thought he saw signs that he wouldn’t be picked. Kelsea talked about how she was looking for a song for her to explore and branch off with. Since Damian originally recorded it with an acoustic guitar, he anticipated one of his competitors to get chosen. As Kelsea begins to say the song, Damian reads her lips and quickly realizes that it’s his song.

The huge WOW moment for Damian during the whole process obviously involved winning, but he goes deeper with the moment. “For a black kid from Philadelphia to be on a national television show where his song was picked for one of the biggest female country artists…there’s nothing that can keep you from achieving something.” As a result of the work on Songland, his direct message requests have blown up and his company, North 13th, now has much more opportunity to shine and work for artists around the world.

Other Links and References: 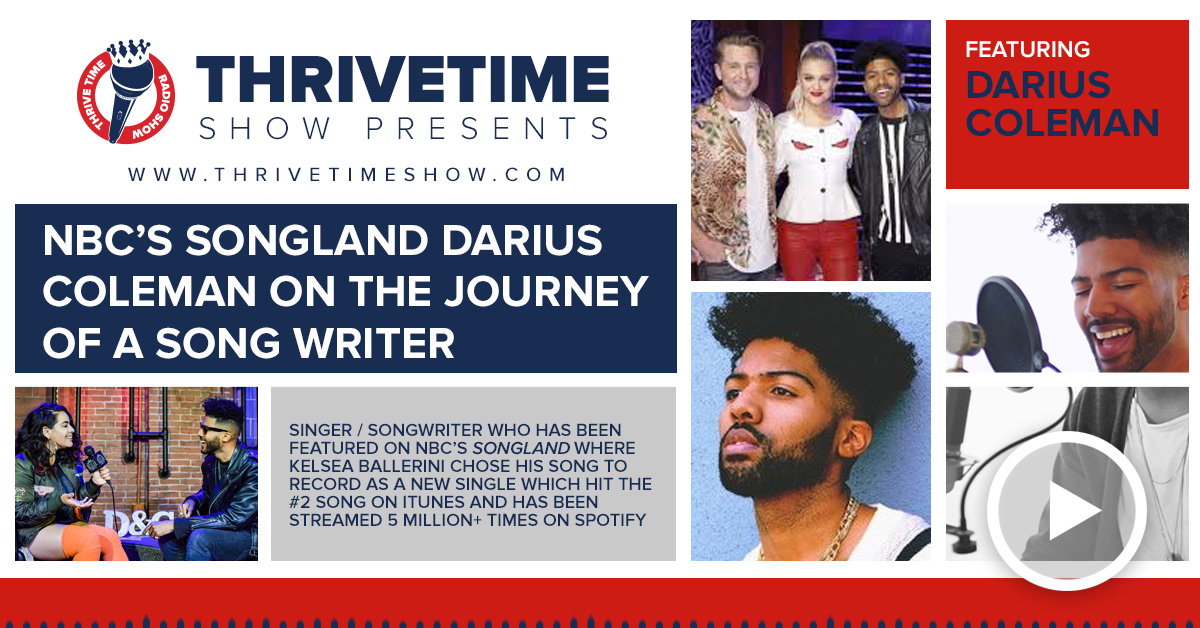