Self Actualization 101 (The Steve Currington Case Study) | Lamborghinis and Yeezys

Do you have visions of driving a Lamborghini, wearing Yeezys and traveling around the world as you please? Today’s guest and Clay Clark’s business coaching client (Steve Currington) shares about what it means to “self-actualize” from his perspective. 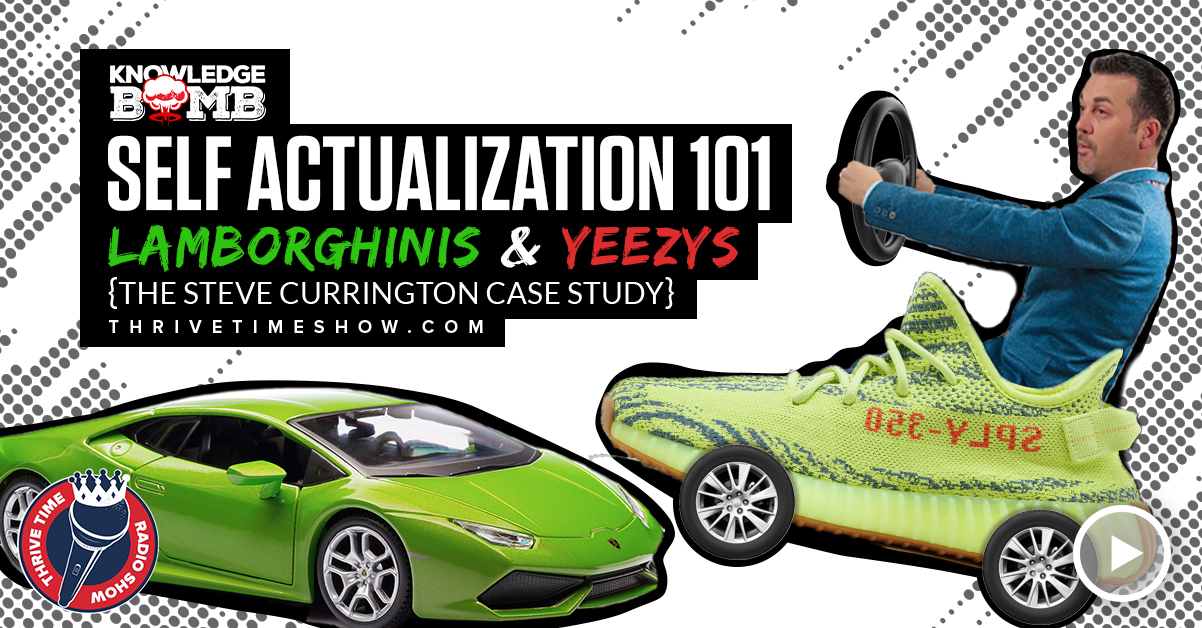 Actualization is the term that was coined by Maslow. You’ve heard of Maslow’s hierarchy of needs. Mr Maslow, he was a PO. He studied positive psychology. What makes people happy, gotcha. As opposed to like Freud, what makes people fall in love with their mothers, you know, that kind of stuff. He didn’t study the electric complex. So the ODA piss complex of why men love their mothers and why. Why did daughters want to marry their dad? That kind of weird Freud stuff. That’s not what Maslow focused on. Maslow focused on positive psychology. And to summarize some of his findings, he created this thing called Maslow’s hierarchy of needs. I’m showing it to you now. It’s a, it’s a triangle at the bottom. You have

err, you know, most people want to breathe, air, water, food, shelter. That’ll things like sleep, clothing, physiological things that you need to survive, food, shelter, sleep, safety, clearly, that kind of thing. Now the next you go up, once your physiological needs are met, food, water, shelter, and then you move up into the safety zone where you want to be safe. It feels safe, right? The third would be you move up for loving belonging where you’re looking for people to say, I love you dad. I love you ma. I love you dad, dad, I love you. And then the next you move up his esteem. You’re like, I’m loved, but now I need to like feel good about myself. Do you have respect, self-esteem, status, recognition, strength, freedom, that kind of thing. Then, but the final version of the final step is self-actualization.

The desire to become the most that you can be, uh, to be the best of the best. And that’s why I have you on the show because today you are wearing Yeezys which are the best, most expensive tennis shoes a man or woman can buy. How much are the shoes that you’re wearing right now? Uh, this, this pair I got for $601, but I had to pay a stock X to like verify them and ship them. So I think they, I think they booked out at about six. Could you explain what they look like to the business coaching listeners? Oh, they are green like my Lambo and um, the souls glow in the dark. Okay. And they were, how much, how much were they again? Will you bid on them on stock X? I won the bid on these for, for six Oh one my second pair. I thought I was going to like really get it.

So I did 81 here’s a little investment. Tip four. I’ve heard them heard this about Yeezys. If you buy one pair, they’re how much? 600 later or six 50. I think by the time everybody if you buy two at the same time, one for you and one for me, they’re only $1,400 Oh, true. You know what I mean? Think about that. Especially now. So if you guys time, if you want to go get two pairs for the cost of two pairs, right? It’s a new thing that a lot of people are doing where you just spend double, but you feel like you got a deal. Wow. So if you ever feel the need to take advantage of that special offer where the first pair is how much again? A 600 and then the second pair is also $600 it’d be $1,200 for two. Yeah. What’s really neat about it is I get a pair and you get a pair.

Correct? Yeah. That’s, that’s a hot deal. So can I just say though this, this whole like pyramid thing, I think this guy stole this from the food groups. I mean it looks just like it. Same colors and everything. It’s just like, I can’t see all the words from here, but I’m like, are we talking about food groups today? Okay, so you’ve got, you’ve got mass low here. Abraham Maslow, the father of positive psychology. He talks about again how when you get to the top of the food pyramid, no, no, no. It’s Maslow’s pyramid of needs. You start off with the physiological, the bottom, then you move up, you need, you need safety, then you need to have your needs met for love and belonging than esteem and self-actualization. We move on your pants. What pants are you wearing right now? What is this? Cause you are self-actualization one-on-one.

What are you wearing? Uh, they’re like some black four way stretch. Like, I dunno, they’re kind of look like slacks, but they’re not. They’re this Lulu lemon. I dunno. They’re, they’re just comfy pants. And then the car that you drive more often than not is a what? Alexis? No, a Lamborghini. Okay. My backup cars. Alexis though, bro. Right. There you go. When you’re telling your well, which is basically a Toyota, what, what’s, what’s it like to struggle through life? And Alexis as a backup vehicle. I know you should write a book. You should write a book about, um, the just dealing with adversity. Yeah. And what it’s like when my Lamborghini doesn’t work and I have to drive my legs. It’s like when you’re getting a new rep and you can’t drive your Lambo. How I pushed through adversity. So anyways, so again, you, you move up Maslow’s hierarchy of needs and as it relates to you, your, your needs out, your, your self actualization as you love Yeezys you love Lamborghinis and you have a shirt that uh, a cartoon of you and your buddy and your YouTube show.

Lambros no, I’m just saying that because everybody out there, we need to write down, we need to define what it means for us to be successful. We have to define what it means for us to be successful for you to be successful. Because I would not want a Lamborghini. I would not want to travel as much as you do, but you do, you, you shouldn’t let me put my goals on you. You shouldn’t let other people, Steve, define your goals, but doesn’t it bother some people that you drive a Lamborghini? Oh yeah. What kind of comments have you heard from people as it relates to negativity about you driving a vehicle? Well, when I met Joel, uh, the veteran, um, one night at dinner, he said that, uh, this could all be found on the Lambros YouTube channel. He said, he go watch it. He said that basically since I own a Lamborghini, I am the D word.

So I’m a jerk or a N, you know, B just simply because I want to ever get, and I said, well, what if I owned a Prius? Would I, would I also be? And he’s like, yeah, you would. So I think some people, just the fact that you have what you have pisses them off so they’re there. I would say most people, the vast majority of people get irritated when they see you drive a Lamborghini and they’ll ask you like, how much are those shoes? And you’ll tell them how much. Again, yes, they are lot. If you have to ask, that’s what I tell them. And then people and then people get mad. Yeah. Why do people get mad that you’re achieving your goals? I don’t know, man. I never really understood that. I just kind of figured out that about half the people that I meet, no matter what I do are gonna ha like hate me.

Not even just like, I don’t really like Steve. They’re just going to maybe even 60% they’re going to be like, I hate that guy. So if you’re out there today and you’re listening and your job, your, your goal, your definition of success is going to every single one of your kids sporting events and never traveling, that’s fine. And if your definition of success is traveling all the time and having a, uh, becoming a YouTube star like Steve here, you can do that. That’s fine. If your definition of success is, I don’t care, I don’t care what it is, but you need to know what it is and define it because Steve, the only reason that you sell mortgages is so that you can buy your Yeezies drive your Lamborghini, take your wife and family on trips. Yup. Right? Yup. And become a YouTube star. That’s right.

That’s the purpose. Fun. And that’s what is fun to you. You can live, you can live life the way that Marvin Gaye sang a song. I give you permission to do that. But today I want everybody to take just a moment. Take a moment out of your schedule. I know we’re all busy and define what your goals are for your [inaudible] life. What are your goals for your faith, your family, your finances, your fitness, your friendship, and your fun, your faith, family, finance, friendship, fitness, and fun. What are your goals for these areas? Define them so that you can self actualize. Rap before my eyes, like Steve Currington. Check him out today on his YouTube channel, which is called what? Steve. It’s a, you can find me just by searching Lambros Steve or Lambros on YouTube. You can find him right there. Love him or hate him. He has self actualizing that Steve Currington and now that he further I do three to what.