Learn how Jen Allen of Bodycentral PT has been able to see huge success by implementing the proven systems and processes. 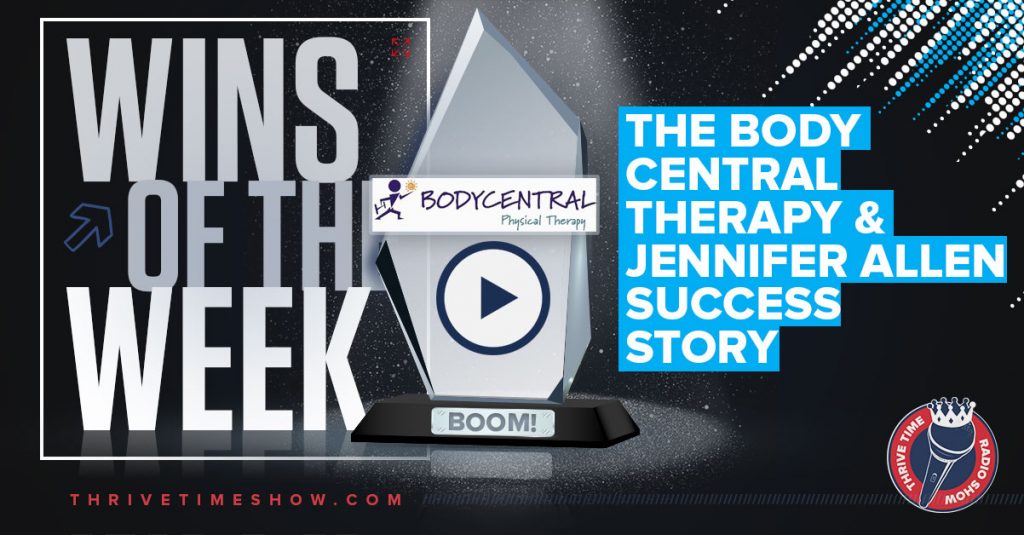 You have questions. America’s number one business coach has answers. It’s your brought up from Minnesota. Here’s another edition of ask clay, anything on the thrive time business coach radio show actually work? That is the question we get asked so often here at the thrive time show in our in person workshops via email, at info at thrive time, show.com uh, friends or asking other friends. Does the system actually work? Yeah, I know they have over a thousand reviews on iTunes. Yes. I know there are over 450 reviews on Google. Yes. I know there’s over a thousand video reviews on YouTube, but does the system actually work? And so I thought we would do on today’s show is we would actually give a call to one of our Thrivers, a lady by the name of Jennifer. Now Jennifer is the cofounder of a company called body central and want everybody to take a moment to do a Google search for bodycentral PT. Just take a moment. Um, if you’re listening on your phone or some other kind of device, just just take a moment. And Google bought bodycentral therapy, Tucson, that’s bodycentral PT, Tucson, Arizona. That what you can understand that this is a real business, a real person. And without any further ado, now back to the buddy central, a testimonial, the bodycentral PT story. This is Jennifer explaining how, how the thrive time show business coach program has impacted and improved her overall quality of life and the growth of the business dramatically.

Well, I didn’t have a Robert Redmond calling and uh, we’ve been working with each other for a while now. And so I just wanted to ask you a do questions, uh, get your feedback. Oh, first of all, can you just [inaudible] product, introduce yourself and then tell us about your company and the size of your company and all that. Sure. So I’m Jennifer Allen. Cool. Own a physical therapy. The company, we have eight locations in Tucson, Arizona. Soon to have nine. We have 115 employees. Um, it’s been growing like crazy. Okay. Um, and, um, that’s kind of it in a nutshell. That’s a pretty, that’s pretty impressive. That’s great. And how long have you been though working with, with, with me and with thrive. Okay. So I started with the [inaudible] online platform. Yeah. And, uh, got so much value out of that. I came out and did a, um, one of the business conferences, which was fantastic.

And um, after that signed up to do the one on one business coach, I’m with you starting in, uh, March of 2017. Okay. Uh, so we’ve been working together since then. It doesn’t even seem like that long. Two years. It’s gone by fast. Yeah. Two years. And what are some, like the practical changes, but you’ve been able to make by working with the one on one business coaching program over the last, last two years here? Yeah, so some of the things that we, we’ve done, um, one of the things was the first thing we did was the website, the development where I had, you know, the basic website that was just, yeah, pretty much just informational. And now we have lead generation happening on the website. So we’re actually like getting live leads from the website. Um, so that was the number one thing that we did, which is, which has been a game-changer for us.

Um, and then as part of that website development using online advertising to drive people to our site and then further convert them off the website. So that’s been great. Um, part of that also has been an SEO optimization. Um, you know, learning how to do that and I’m okay, you know, become number one, uh, in Google. That’s our thing where we are pushing that hard, quite successful with that. Um, so those, okay. That’s kind of how things went with us. And then from, you know, from a personnel standpoint, our hiring process, you know, being in Tucson, Arizona, we don’t, I have a lot of access to physical therapists. We have a hard time getting physical therapists to move here and with changing our hiring and recruiting processes and having a system for that. And for me to do that, myself and my team, Oh, without having to hire a recruiter and pay them a percentage of the salary.

Uh, that’s been a huge game-changer. Um, you know, I hired 12 physical therapist last year. Well that’s unheard of, but, and these are, these are, these are people with doctorate degrees, doctorates, correct. [inaudible] degrees. Um, so that’s been a really, really good thing. And we’ve also implemented group, uh, interviewing system for our administrative personnel and that has been great too. So yeah, no, that turnover in those, yeah. Level positions as administrative positions, Oh. Tends to be high in the medical industry. So being able to constantly have good candidates in front of us and being prepared if somebody moves or somebody decides they don’t want to be a front desk person anymore. Um, it’s been really great. We’ve been able to [inaudible] ah, get somebody good right away and we’re actually getting higher quality candidates because we’re not just hiring the first person that comes off the street to fill that position.

We’re not in that panic mode anymore. Um, we’re ahead of the curve. We’re able to pick and choose [inaudible] the best candidate for the position. Yeah. I remember you sent me a video once and you guys have like 50 people. Okay. Your group interviews. Yeah, that was the big one. Yeah. So we believe we run from anywhere from 20 to 30. 30 was a good group for us to manage, but we did have a 50, 50 couple people show up for that one group interview. That’s awesome. That’s awesome. W w what are some of the ways, that’s right. Uh, you grown, you know, there’s a lot we’ve done, but, but how have you actually grown since then, since you started working with us? Yeah, so I think personally my biggest growth areas have been in [inaudible], uh, people management. Um, I’m not sure a softie that kind of lets people walk all over me.

And, um, prior to this training I had a hard time holding people accountable and not feeling bad about it. And so I, I, I feel like that is the biggest change in me personally. And it’s given me more confidence and dealing with just everything that I deal with on a daily basis with work. Um, being able to hold people accountable, let them know what their expectations are and not feel bad about saying, Hey, this is what needs to be done in this position and you’re not doing it, and what are we going to do to, to get you there? And yeah, and, uh, I think as I become a better, um, a better business owner in general because of it. That’s awesome. And then [inaudible] well, how was that? How has the company grown since working with us? Or, or, or what have your numbers look like over the past couple of years?

Yes. So if we look at it, gross revenue, I mean, we’ve basically doubled that in the time that we’ve worked [inaudible] together. And, um, and as far as personnel, we’ve doubled that and we’ve also doubled, uh, almost yes. Doubled our number of locations since we started working together. And that’s still on it and on an upswing trajectory. So I don’t see us slowing that down at all. Um, yeah, it’s just been, does crazy growth all the way around. Yeah. Yeah. I remember, uh, when we first started working with each other, we did your 13 point assessment back in March, 2017 I remember you said you just finish the year. Okay. 2016 in and I believe you said you did 3.9 million and then last week you told me you guys did 6.4 this past year. Yeah. It’s almost 6.5, so yep. [inaudible] yeah, quite a jump. Yeah. That’s awesome. Last question here.

Okay. Why would you recommend and other business owners to thrive? Okay. I think as a business owner, um, we are, a lot of times we function like firefighters. So we are that the person that everybody calls to where the fix it people, Hey, we have a problem over here. We have a problem over there. And, and I think that sometimes we get caught up in this reactive States. And so as far as our businesses concerns, you get, you get in a rut where you’re not able to grow it because you’re spending your time doing things that, you know, if you could just get ahead of the curve, you’re not going to be having to do those things. So I think as a business owner to give you the control that you need over your business. Yeah, too. Get control of your own schedule. Um, have more control over what’s happening in your business and the, and the growth, um, and development of your business. Um, you guys are just amazing to get, get business owners on track and, and to evaluate where our weaknesses are and strengthen those areas.

To quote my main man, Napoleon Hill, Napoleon Hill, the bestselling author of think and grow rich, the time it will never be just right. You must act now. I repeat. The time will never be just right. You must act now. Or to quote Thomas Edison, the legendary creator of the modern light bulb recorded audio recorded video. The man who founded GE general electric. He once said that vision without execution is a hallucination. Vision without execution is hallucination. So if you want to turn your dreams into reality, you want to go from ideas and dreams and hopes and actually turn those into results. I would encourage you to schedule a one-on-one 13 point assessment today simply by going to thrive time show.com or book your tickets for our next in-person thrive time show business conferences. Now, here’s what’s great about that. Our business conferences are normally $250 $250 and there’s no upsells at the business workshops.

However, if you’re in a spot where you can’t afford the $250 right now, I get it. I once worked at Applebee’s and target and direct TV. I once had three jobs. I know what it’s like to have nothing and to be working all the time trying to get some sort of traction. All you have to do is leave us an objective review on iTunes so you subscribe to the podcast and leave us an objective review on iTunes, or you can leave us an objective review on Google maps. I just searched for the thrive time show and leave us a review there on the Google maps. Either way, once you’ve left us a review, just take a screenshot of that review and email us to info at thrive time. show.com that’s info at thrive time, show.com and we’d be happy to cover the cost of your ticket for free. And the only cost you’re going to have is it’s $37 and that covers the food for both days and the workbooks that we do provide for you. And so now that he further I do, we have to end every show with a boom. So three, two, one.