Learn how search engine domination has the power to DRAMATICALLY INCREASE YOUR LEVEL OF COMPENSATION while hearing a special song dedication to Josh Spurrell the Canadian CPA. 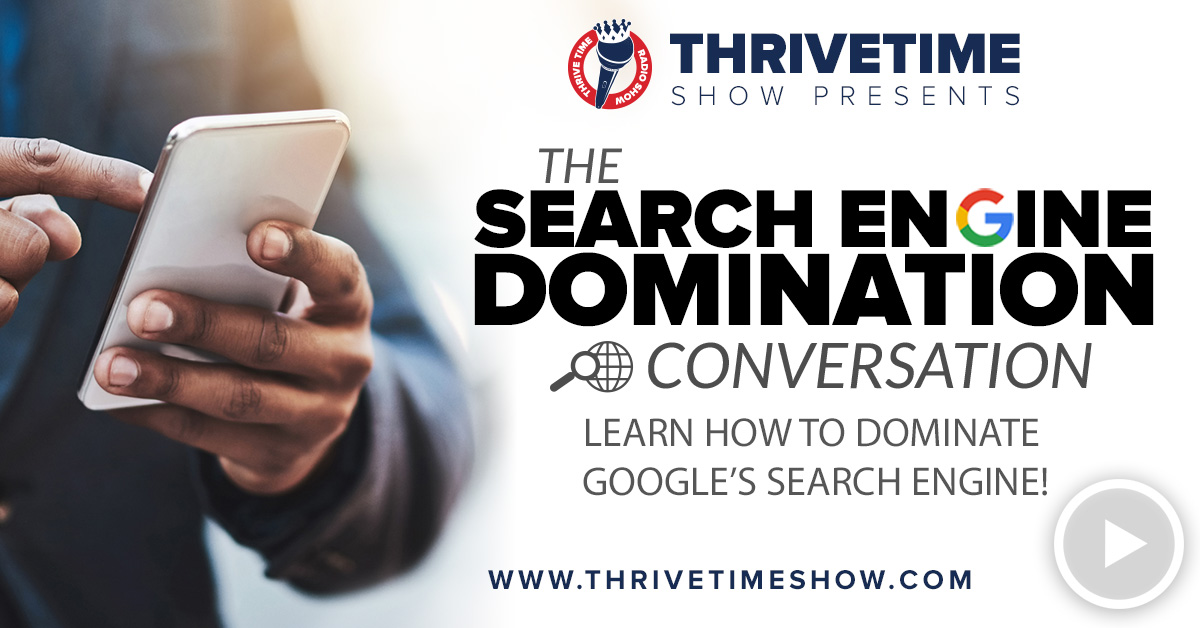 Jason Beasley. What is going on? Oh Man, I’m having a great Sunday morning here in the box. Hey, you have um, worked with clients for for quite a while now and you’ve seen them have success. Is it amazing to you how much search engine optimization can absolutely change the level of compensation that business owner receives? Oh, I deal with it every day and it still blows my mind. So if you’re out there today, if somebody is out there listening today, Jason, ah, what guy, why would you encourage them to go ahead and reach out by emailing us to info at thrive time, show.com and encourage them to go ahead and let us do a free 37 point website analysis and audit on somebody’s website? Well, I would highly recommend that they do because a lot of people don’t know what’s wrong with their website. They go on to any of the website providers or they deal with a web guy directly and a website is built, but it does not rank and there is no form of optimization for it that nobody can find. It’s like having a beautiful billboard that’s in the woods, right? You gotta get in front of your ideal and likely buyers. So on today’s show, we’re talking about the search engine domination conversation with the Canadian accountant by the name of Josh Spiro and the Alabama ophthalmologist by the name of Dr. Timothy Johnson.

Some shows don’t need a celebrity in a writer to introduce the show, but this show down to math eight kids, Koch created by two different women, 13 moke time million dollar businesses. Ladies and gentlemen, welcome to the thrive time,

All right. Let’s just say that you’re out there listening today and you have a website for your business. The question I would have for you is, are you getting the most number of leads possible? Are you ranking high? Wow. Touching the canvas can feel my face or are you ranking? Whoa. And the Google search engine results. Again, I asked, are you ranking high or are you ranking low on the Google search engine, a search result? Take a moment today and do a Google search. The keywords that you want to come up top for and see where you are ranking. We have Josh Sperl, a CPA from Canada and we have Dr. Timothy Johnson here from Tuscaloosa, Alabama. Uh, Josh sperl. How in the heck are you doing? Pretty good clay yourself? I’m doing well man. Doing well here. I, I, uh, we’re not broadcasting from the man cave studios as normal, so we got a little bit of background noise there to contend with, but we’re here and I wanted to see if you could share with the thrive nation approximately how long you and I have been working together and how that’s impacted the number of inbound leads that you’re generating as a result of your Google search engine ranking and internet marketing.

Well, we’ve been working together clay now for almost a year. As about a year ago, I came out to my first conference and then we, uh, uh, started with the coaching program shortly after that. And you know, our, our, our Google leads have gone from, you know, something that we would generate, um, you know, maybe one or two or three leads a year to talking about three to nine leads every single week. And now we have Dr. Timothy Johnson in the box from Alabama. Tuscaloosa.

Yeah. So I’m at southern eye consultants. It’s in Tuscaloosa, Alabama. We heard about you on the business podcast and I had a lot of trepidation at first about getting involved, just making sure it was legit, but all my expectations have been exceeded. What concerns did you have about our legitimacy or lack thereof? Uh, I was just concerned about, uh, backend, uh, upselling, um, what I was getting into.

No, that’s what I’ve found my entire career. I had been had you guys, had you guys been to a doctor, Tim, had you been to other workshops or had other industry coaching before? Cause I, I had hired a lot of them, frankly, and I, I’ve just found I’d spent it, I would be lying if I said hundreds of thousands. It’s been more than,

oh, we a, we hired somebody to do our website right before we found you. Yeah. And it was three or four months of your business coaching service and they, we still haven’t launched that website yet. Oh, beautiful.

Dr Tim? First of all, come to one of the conferences. You’ll see that he may dress like bill Bellacheck, but he, uh, he, my wife’s a pats fan, so that was a real selling point. Nice. She thought you were a Hobo, but I said, no, he’s just bill Belichick. She goes, okay, you can go. Um, but it’s also month to month, so try it. And if you don’t like it, cancel.

That deserves a mega point. So again, what is, where has your sales gone up? Have you, have you increased your sales? I mean, where, where’s your financial as I’m asking the hard number here, but as a percentage, how much are you up since, since you started with the program? What, four months ago?

Yeah. Versus now. Our sales have gone up 20%. We’re looking to scale southern eye consultants and uh, we are just the number of patients who come in cause they found us on Google has gone up a lot. I text you once a week. Yeah. You paid for yourself just in somebody’s walking down. So,

oh, so good. It’s so good. If you’re out there today and you feel stuck, just email us to at thrive time, show.com info at thrive time, show.com. Let us begin to do a deep dive analysis on your website. We’ll tell you what’s wrong with it. We do a 37 point audit of your website. Our member of our team will call you. They’ll go over it with you, they’ll break it down, you’ll understand what you need to do to improve. I’ll give you the final words here guys. So let’s start with you. Uh, Captain Sperl, uh, Josh spurl CPA, uh, as Captain Canada and as a man who has been to two workshops now we got a audience picture, a half million people listening here. What would, what is the advice that you would tell them?

I think they got to come out too. They got to come out to a b and you know, what’s the best one that, uh, that I’ve ever seen? You know, I, I find that most of the workshops I’ve been to, you’re sitting around all day for one good idea and you’re getting a good idea every single hour at these business conferences.

I’d say the worst idea you can do is not starting now. Just call and start now and you’ll be better off for it.

You heard him right there. Thrive nation. Go to info at thrive time, show.com. Email us to info at thrive time, show.com. Allow us to do a free 37 point analysis of your website will tell you what’s wrong. We’ll tell you how to fix it. If you’re not ranking high enough and those Google’s search engine results, it will literally cost your company millions and millions and millions of dollars. But don’t take my word for it. Go to thrive time show.com and click on the testimonials button. And as of the time of this recording, we have over 1000 video reviews from my clients I’ve had from 2008 up until now for conference attendees. You, you’re just, you’re just an email away from a game-changing, uh, US becoming a game-changing success story. Emails today, info at thrive time, show.com and we’d like to end every show and every, a shameless testimonial session with the boom. And so now that he further ed do three, two, one Oh, Josh Berl, I dedicate this next song to you. Oh, Captain Canada. Yes. This, this Canadian national anthem. We’ll be saying in your honor and [inaudible] and Canada’s on. Here we go.

Oh, ah, ah. Yay Man. Come on Bro. [inaudible] hey tree boss carb man. Brian out off [inaudible] can be ice in hockey. [inaudible] Nah, I know. I’m stop mounties on our, on God. [inaudible] Josh [inaudible] tax. Hey, shut socialism on board. Okay.  by our mere that Derek.

Yeah, I mean, that last comment there, because think about it, if Canada got attacked, you guys got attacked, you know we’re going to come rescue. We can’t have communists taking over up there. So you guys are, are getting taken care of. But I’d tell you what, I appreciate you guys for always being up there looking down on us and not judging us in a patronizing kind of way, but you just locate it up higher geographically and you’re just looking down on us.

bill used to call me on my cell phone. Wow.