Clay explains why discipline, rigor and a commitment to doing best-practice repetitive tasks is the true key to both time and financial freedom and why the “addiction to new” will only renew perpetual poverty. 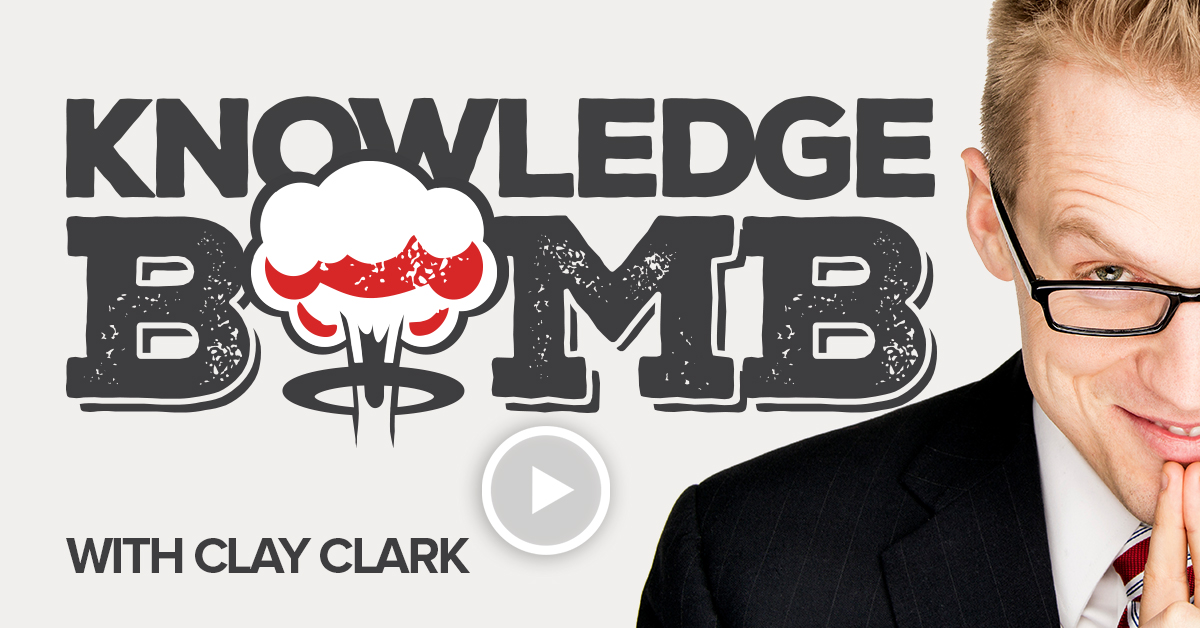 All right. Here we are for another, uh, knowledge bomb edition of the thrive time show on your radio and podcast download, uh, t on today’s show. I are drink to the recording of today’s show. I’m walking down the, the river here that goes behind our 1100 riverwalk terrorists office. And the message I want to focus on today is rituals create residuals, but the inconsistent only create the non existent again or repeat rituals create residuals, but the inconsistent only create the non-existent. So think about this for a second. Let’s just talk about the areas of faith, family, finance, fitness, friendship, fun. Let’s go ahead and say, let’s go with fitness for 5,000 points. Fitness for 5,000 points. If you and I work out every single day at the same time every single day, and we decide to eat less calories than we burn, right? So not as a one time fad diet or one time event.

We had the guests, David Bach, on the show, the nine time in New York Times bestselling author of the automatic millionaire book series, David Block. And David [inaudible] said during our interview that if you essentially don’t automate your savings, you never will. So what does that look like? Well, you just go to the company that does your paychecks or your HR department and you say, every week when I get my check, I want 10% of my gross revenue to go into my savings and Andrews case, it’s 25% of the gross revenue. Well, Andrew has been doing this for a year. He and his wife both. And guess what? Guess what? These guys are a, they own their first rental house. Uh, he’s only 20 years old and he’s debt free outside of the mortgage he has for the rental property. And that mortgage is being paid for by a renter.

I mean, think about that. It is just one year of diligence and consistency. What happens is in the world of business, if you want to build a foundation of success, you have to have certain rituals. So like a ritual, number one would be, hey, every single day we’re going to get an objective Google review from one customer. Now, if you did that every single day, you would be like a one of our clients, Dr. Morrow, Dr Mauro Lie, a Marmaris, Dr. Morrow, Mark Morrow, his company’s morrow, Lion Kid Hermann. It’s a pediatric dentistry. Uh, he’s the highest rated in most reviewed pediatric dentist in Oklahoma. His business is growing dramatically. His advertisements work well cause he simply has made the ritual, the habit of getting reviews part of the company culture. Another example would be you have to look at your accounting numbers every single week and every single week. On Friday at five on Fridays, my wife comes up to the office and she looks over the budget of our business and make sure that we are sticking within our stated budget for payroll, for expenses, for advertising, these kinds of things.

And because she does that every single week, the budget never gets out of line and never gets crazy. We never go over budget. There’s no cash issues, there’s no drama, but some people just cannot figure that out. It, it seems like the income, some people just can’t grasp the idea that being inconsistent creates the non-existent. This idea that, God, I don’t want to do it again. [inaudible] mean every week. I have to look at the numbers. Some people hate the idea of being consistent. And when I say some people, I would say most people, most people hate the idea that they would have to put into their calendar a set specific time to look at their budget every week, which is why most people will never have success. Most people hate the idea of automating anything. You realize that David Bach is arguably the world’s number one financial advisor and this guy has reported that the clients that he has worked with automate their savings, essentially all become millionaires over time due to the power of compound interest.

But yet nobody, he’s never worked with anybody ever who’s ever created significant wealth without automating their savings. Um, [inaudible] elephant in the room, our men’s grooming lounge, we do a group interview every week. So every week we interview new candidates every week. Yeah, every week. Even the week of Christmas, we interview new candidates every week. And you know why we do that? Well, cause we have great stylists that want to move to Dallas or Oklahoma City. Uh, we had one great stylists getting married and uh, move. We had another one moved to Austin there we had another, uh, we have people moving all the time. People are getting promoted, people were having babies, people. Life is changing all around us. And if I’m not consistent about recruiting, I would find myself in a bad spot, which is why I never stopped recruiting, which is why I never have a staffing problem. I’m never short staffed because I’m never done recruiting.

And we do our interviews every single Wednesday at 5:00 PM every Wednesday at 5:00 PM. You say, clay, how do I find good people? Well, every single week we post on Linkedin, Facebook, and indeed and every single week we interview all the candidates at pm on Wednesday. That’s how we do it. You say, clay, I want to get into a great spot financially. How do you do it? Well, you automate your savings. You say, clay, I want to make sure my budget doesn’t, doesn’t get out of whack. What do I do? Well, what you do is you make sure you set a time weekly like my wife does every Friday to look at your numbers and to make sure that you are on track, that you’re being proactive, you’re not being reactive. But if you are somebody who cannot commit to regular recurring rituals, you can’t create residuals. You can’t create residual income, passive income, or any kind of success at all if you’re inconsistent because the inconsistent can only create the non existence.

My name is Clay Clark. I am a father of five. I am a business coach. I’m the, uh, a guy who’s been able to have a lot of success in the world of entrepreneurship. Um, between my partner, Dr Zelda and I, we built 13 multimillion dollar companies, but I didn’t take Algebra multiple times. Okay. I can take Algebra three times, how to take my act three times. I’m not a super duper smart guy. I’m not a super intelligent person. I stuttered quite a bit in school. I’m not supremely athletic. People that know me know that I’m certainly not a model and I definitely could not be a hand model. I don’t have anything that you don’t have other than I am. Perhaps the most consistent human that you will be around. And the people who are more successful than me are the people who are more consistent than me. And that’s the same way in sports. It’s the same way in investing and finance and relationships. It’s the consistency that creates that wealth because it’s those consistent rituals that will create those residual income earning activities in your life. Again, it’s the rituals that will create the residuals, but it is the inconsistent that will create only the non existent, Aka nothing.