What to Do When You Catch Your Employees Stealing from You?

If you were to find out your employee has been stealing money from you by using the company credit card for personal reasons, how would you respond and act?

NOTABLE QUOTABLE – “Blessed are those who are persecuted because of righteousness, for theirs is the kingdom of heaven.” – Matthew 5:10 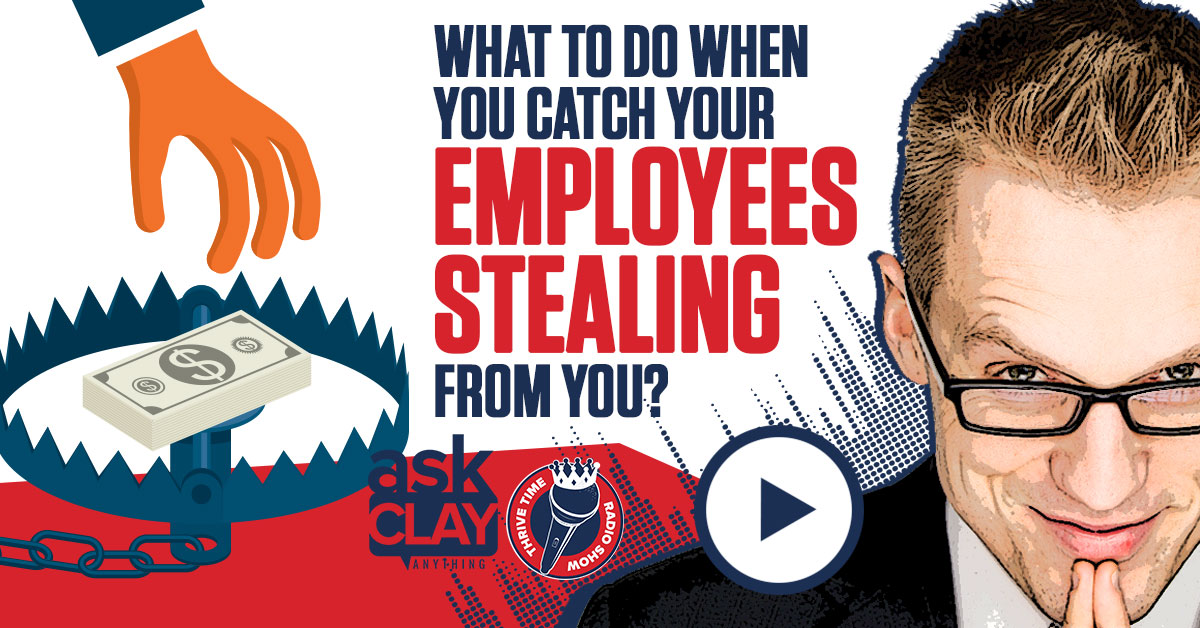 You have questions. America’s number one business coach has answers. It’s your brought up from Minnesota. Here’s another edition of ask clay, anything on the thrive time business coach radio show

All right, thrive nation on today’s show, unfortunately, we are going to answer a question that I get asked by at least 75% of my business coach clients. That is right. I get asked this question by at least 75% of my business coach clients. Why? You might ask what was because the us chamber of commerce teamed up with CBS news to do some in depth research and they found that 75% they found that 75% of American employees admit to stealing from the workplace. And in fact most do so repeatedly. Again, in fact, most do so repeated things. So what do you do when you catch your employees stealing from you? Today’s guest, today’s question comes from a home builder who writes, what would you do if you were to find out your employee has been stealing money from you by using the company credit card for personal expenses? How would you respond and react?

Well, let me tell you how I want to respond. I would like to attack them personally. I would like to threaten them. I would like to go off however, the legal system as well as the world we live in allows people to go on Glassdoor and write whatever they perceive to be true. And people accept it to be true. The world allows people to go onto Facebook and write what they believe to be true or perceived to be true or lying about. And then most people who are not business owners, because again, in our, in our American population, think about this, there are 330 million Americans and what percentage of Americans actually start a business? It’s less than 10% according to the small business administration. So again, less than 10% of the people on Facebook on Glassdoor are employee ERs. And therefore when they read the comments or the reviews or the way you handled it, they will think, what’s your problem?

You need to calm down. But when your life, when your, when your very livelihood, when your golden goose, when your money tree is being attacked, I get it. I understand how scary it can be when you watch somebody who you’ve trusted steal money from you. So I will list off for you, mr Lissner. Mr homebuilder. Several of the bad things that have happened to me back in the day, I interviewed somebody to work for me. They did a good job during the interview and they did a good job shadowing me. And then systemically when I ran DJ connection.com they would actually steal customers. So the phone would ring and they would say, they ever go on DJ connection, how can I help you? And the customer would say, are you guys available on June 6th? And they would say, no, we’re not, but I have a great recommendation for you.

And they would recommend themselves. And they would do that every third to fourth week. And that was also the, the weekends that they were requesting off. And so they were using my marketing system, my marketing machine to create leads for themselves. I have had family members steal an excess of $25,000 of cash from me family members in one month before I caught them one month. I’ve had family members take money from me and buy a truck using company money without asking a large vehicle. I have had family members date employees of mine while being married. Think about that. Think about that. What would it be like to be approached? Mentioned you’re a female working in a company and you’re approached by a family member of the owner to have a relationship and you are, what are you going to do? I’ve had that happen.

I have had, I have had situations where I have worked with the churches and I have seen a church. I’ve discovered that a church had almost seven to $8,000 a month they couldn’t account for, and when we looked into it, we found out that the daughter of the pastor was using the church’s credit card to finance a swag delicious lifestyle to the tune of over a hundred thousand dollars a year. Think about that. I have had so many situations where crazy stuff has happened. So what I want to help you do is I want to help you run into a situation when this never happens again. So step one, and I hope you’re taking notes because I am step one, we want to schedule a week, will a weekly schedule, a weekly accounting meeting. You want to schedule a weekly accounting meeting where you’re going to look at the numbers and you’re going to verify that what was purchased was actually purchased for the company.

You have to schedule a weekly accounting meeting to verify purchases. You have to do that. You cannot abdicate. You have to delegate. So you need to need, you need to schedule a weekly meeting to look at the purchases. I personally have chosen for my personal hell to occur on Fridays. So on Fridays that’s when I discover people taking my cards and using and abusing them. And this happens a lot because 75% of employees, what steal from the workplace and most do so repeatedly according to the chamber of commerce and CBS news. Now, according to my personal experience, I think the number is higher. But step one, you want to schedule a weekly meeting to verify purchases, okay? Every week it’s the same time every week. Now step two, step two is you want to document issues because the way the world works is again, what percentage of people actually start a company?

Ah, 9% writes, only 9% of our population will ever start a company. Now, according to Forbes, nine out of 10 businesses will, will fail. So if we’re math wizards, we would determine that less than 1% of people actually ever start a successful company. So therefore, if you were to take this into court of any kind at all, the vast majority of people who are jurors your peers, those people would think that business owners are bad and employees are good because the vast majority of people are not business owners. So step one, you want to schedule a weekly accounting meeting to verify purchases. Step two, you want to document all of the issues, document the issues. Step three, install keystroke recorders. A keystroke recorder is a program that allows you to actually track what people are. Tra are typing into the computer during the day because if you do not do this in the digital age, people will be going online and applying for jobs on your dime.

They’re going to do it. So you have to install a keystroke recorder. Yeah, I know, I know, I know I’m supposed to do it, but are, have you done it? The question I have is, are you doing it? Well, I want to do it. Have you actually gone to active track.com and installed keystroke recorders for your employees? In the next step, step four, you want to install call recording. I recommend that you use clarity voice.com but business coach client sounds like you’re paranoid all the time. I want to trust my employees. You can’t trust your employees. Why? Because 75% of people steal from their workplace. So again, we install the keystroke recorders from active track.com step four, we install the call recording from clarity, voice.com step five, install GPS systems installed GPS systems on company vehicles. Why would you do that? Because you want to verify that your employees are actually going to the job site because usually, they’re not, when they say they’re going to Lowe’s to pick up supplies, they’re usually going to anywhere but Lowe’s.

Step six, you want to install cameras. You want to install cameras. I recommend the company called yet nest. I recommend a company called nest. Now there are, there are other companies that have affordable camera solutions, but I recommend using nest. It’s nest.com now you might say, well, clay, this guy stole money from me and what do I do? How do I handle it? Well, I’m trying to help you treat the root of the issue, deal with the root, not the fruit. The root of the issue is that we probably don’t have, most businesses don’t have the paranoia required to be successful sustainably according to the founder of Intel, according to the founder of Intel, think about this for a second. Only the paranoid survive, only the paranoid survive. Now, who said that? Who said that? Take a guess. It’s the founder of Dell and his name was Andy Grove.

Obviously is stealing money from you and doesn’t have a problem with it, so we need to make sure we tread lightly. We want to gather all of the information, gather proof that the person is, in fact, using your card for personal purchases and then document the issues and then pick a date in the calendar when it is most convenient for you. Pick a date. Is it November 7th November 8th January 5th choose a date in your calendar that’s most convenient for you because step seven is we must conduct a weekly group interview, conduct a weekly group interview because he who has the most options wins. So document all the issues and in your mind, determine when you’re going to fire this person. And then when you have the most options, when you have a backup when you have, I mean it might cost you less money to have someone steal from you every week than it would to replace them right now.

Think about that and then choose in your mind when you’re going to fire them and through the process of the group interview, you will find great candidates. There are great people out there. We have great people that I work with on a daily basis. Great. People like Sean, like Claire, like Harley, like Robert, like Amanda, like Amelia, like Andrew, like Larry, like Felicia, great people on our team that can be trusted on a daily basis and these great people are abundantly available if you do the group interview. But if you feel stuck or trapped, you might have to stick around with them for the short term, but do not let the emotions get in the way of the motion you need to take. Don’t get emotional about this. Don’t not fire them because they’re family or friends and don’t fire them immediately because you’re so mad.

Choose the right time for you to fire this person. So the question is what to do when you catch your employees stealing from you? My answers to you would be step one, schedule a weekly accounting meeting to verify purchases. Step two, document the issues. Step three, install keystroke recorders. Step four, install call recording. Step five, install GPS systems on company vehicles. Step six, install the cameras. Step seven, conduct weekly group interviews so that you can fire people when you need to. My name is clay Clark. I’m a business coach and I’m going to go swim in the pool with my son without any further ado, three, two, one, boom.