Dr. Z breaks down private equity 101 and the men break down Jack Welch’s top 3 business rules including:  “Number one, cash is king… number two, communicate… number three, buy or bury the competition.” – Jack Welch (The Former CEO of GE who grew the company by 4,000% during his tenure)

Title – “Private equity groups are starting to buy up optometry and ophthalmology practices across the country. Just last year they bought their first practices in Alabama. I know this has been a thing for years in dentistry. I was wondering how much of this you have seen in other fields. What is PE’s general playbook? How does this alter an industry? How can you respond to PE groups to profit and thrive?” – Doctor Timothy Johnson

NOTABLE QUOTABLE – “Number one, cash is king… number two, communicate… number three, buy or bury the competition.” – Jack Welch (The Former CEO of GE who grew the company by 4,000% during his tenure) 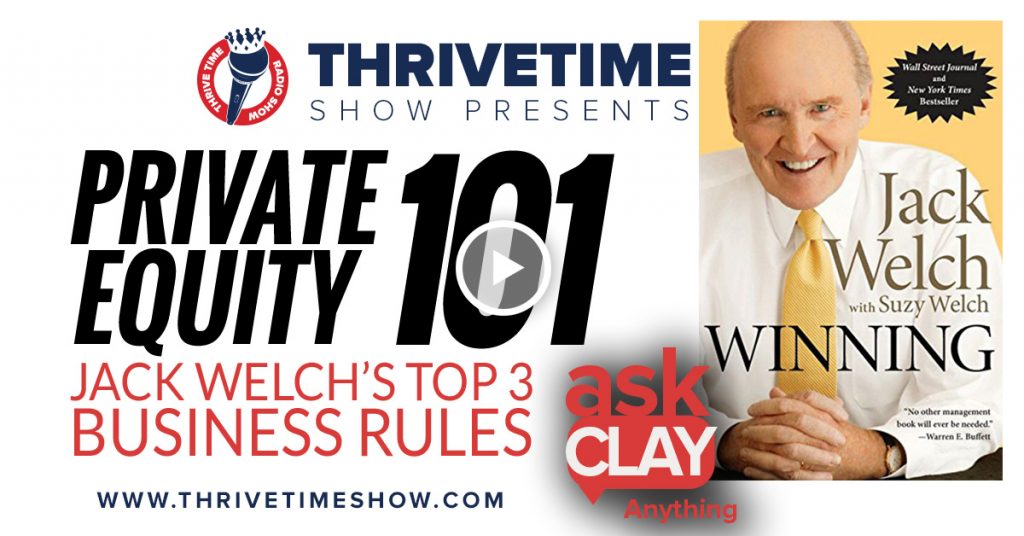 Do you have questions? America’s number one business coach has answers, hits you’re brought up around Minnesota. Irsan another edition of ask clay. Anything on the thrive time business coach radio show,

Rod nation. On today’s show, I, I’m very excited because this show is going to be 90% Z. Oh, 10% me. Wow. So it’s like a, you know, a star to star movie and it says starring Meryl Streep and then some other people. This is [inaudible]. I’m Meryl Streep and you’re, you’re the Meryl Streep of this. Wow. Your presentation, I feel kind of weird, but I feel yet honored at the same time because there’s a guy named Tim who was an ophthalmologist. Okay. Who writes private equity groups are starting to buy up the optometry and ophthalmology practices all across this country. Yes, it’s a deal. Just last year they bought their first practices in Alabama. I know this is a big thing in the dentistry industry is I know this has been a thing in the dentistry industry for years and I was wondering how much of this have you seen in other fields?

Um, what’s your, what’s your plan? What’s your playbook there? Z for your book? What’s the, what is private equity’s general playbook and how does this alter an industry? So how can you just do what he wants to be educated about private equity, what you know about it, how big of a threat you see it as being for you and your industry and just kind of walk us through your industry that is being bought up by a lot of private equity funds. These are funds they have, they have money, millions of dollars. They managed billions of dollars. They manage and they go into industries and, and buy up industries. Talk to us about private equity and how that has impacted you or has impacted doctor Robert Zoellner and associates.

Well, what happens with the private equity is you get a bunch of guys together that have money. Let me say, hey, how can we take our money and make more money? Yep. Long money. Yeah. And what they’ve decided, hey, let’s not reintroduce the wheel. Let’s go around and buy up businesses that we like that make money, that seeing like the right thing to do. Yep. And then we can package them together and resell them at some point, hopefully for a bigger number than we bought them for Levy. Here’s my example. You’re buying a onesy twosy is you’re buying up, let’s say you’re buying $1 million businesses and at $1 million business, you know, you can pay a two, two and a half times rate to buy him. And what that means for everybody listening out there going, Huh, what happens is, is that the value of the company, a lot of it’s based upon the most common model of valuing a company is how much money does it make?

I mean really that’s what it boils down to is how much money bottom line is this company make, how much, how much? Now sometimes you have to read between the lines. In other words, sometimes this sounds crazy, I know, but some people run some of their personal lives or their business sounds crazy and it’s actually sort of a benefit of owning a business you’ve got that can travel and I know it doesn’t sound really, it’s crazy. I’d be a little silly on that. I just want for the people out there who aren’t aware of the benefits is, you know, for Doctor Robert Zoellner and associates, you might buy a vehicle up the company car or right. A company trip. That’s not unethical. That’s, that’s normal, right? And you’re on that trip, you’re going to a conference that furthers your business. And so therefore it’s a business write off as far as the traveling and all that to there.

But my point is is that whenever you look at them mostly, let’s say you have $1 million business and it makes $200,000 but when you really filter it through the money, it’s really making two 50 to 300,000 okay, all right. For somebody else to buy it. So then you say, okay, let’s take that two times. So 600,000 or two and a half times, let’s call it you know, seven 50 and that’s a value of two. You buy a bunch of those and now you have a, you bought 10 of them, now you have a $10 million company, now a $10 million companies, a little sex here to some people out there and therefore it has a higher rate of it. And so now all of a sudden, what these 10 companies, maybe you can now maybe you can purchase frames since we’re talking in the optical industry, ophthalmology, optometry, opticianry now with 10 offices each still doing the same, $1 million each.

Now maybe you can buy with tin, tin buying, you can buy frames cheaper, you can buy Lynch cheaper, you can buy contact lenses cheaper. Cause now you have the vertical integration of those businesses, right? And so now you might even go, hey listen, let’s go out. And also by maybe a small frame company that can supply frames to these 10 businesses and we can own that too. So now all of a sudden you start vertically integrating all these different businesses that go together and that we’ll be sending, you have $100 million company and there’s a few people out there, they’re like, oh my goodness, that sexy that’s given off a lot of cash. We want to pay five times earnings on that, right? So now you went from buying too. Not only did you buy two, you tightened them up and made more money with them.

You actually help the bottom line by your cost of good sold. You buy at a cheaper price because now you have buying leverage because you have 10 or maybe 20 stores or maybe now 30 stores cause you’re continuing to buy. And so now all of a sudden your bottom line, maybe you’re still doing the same million dollars, maybe not. Maybe you brought some innovative marketing and some other stuff into it to now there may be million, 2 million, three stores that are now making 400,000 net because you’ve actually bought your stuff cheaper, still shows for the same price, but you’re making more money. So that’s what they do. And that’s what they’re doing. So they find an industry that is is a virgin in this arena. Yep. In other words, there’s not people out there buying up and vertically integrating a lot of optometry or optical or dentistry, which has been going on for a little bit now. And they get into that and they have all this cash. They buy, buy, buy, buy,

buy, buy, buy and they repackage and sell it. Now, Dr Tim, uh, I’d be happy to talk to you more about this offline, but I do want to add this commentary. Jack Welch has three rules for business owners. He has three rules. He says, rule number one, Cassius king will number two, communicate, communicate, communicate. Rule number three by or bury the competition. Some private equity comes in to an industry. It’s typically a long money, meaning they don’t need to make a big return quickly, but it’s also usually dumb money. A lot of bureaucracy slow moving. So the way to beat a private equity owned business is to be nimble, to treat customers with a smile, better customer service, better pricing, better energy, better just better, quicker, more responsive, more run it like a run it like a, like a like a small business. Be happy that have that be agile move.

We are more responsive to the marketplace, be cooler, be more unique, be a little bit crazier, it be a little more aggressive because private equity is kind of slow. Kind of plotting. It’s corporate America, Corporate America. So don’t be afraid you can be. And Z, you’ve been competing with private equity run businesses for years and you do well, absolutely. But you run them a little bit more, a little more passionate than more hotness and it give you more questions about private equity. Do not hesitate to email us at info at thrive time, show.com but here’s the thing about it though. If you’ve got a business, I’m gonna approach it. He wants to bite is flattering kind of sexy. You kind of go, Whoa, yeah, that all that cash, but by the time you sell it, by the time you pay off any debt you have, by the time you pay the income taxes on the money, you just got in your hot little hand and then you look up and he’d say to yourself, what do I do now?

Because you know the money I ended up with, I could have had two or three years because boom, boom, boom. Now I’m going to get into her take care of. Because if you do cook the golden goose, you don’t get more eggs. That’s true. You don’t. So you might want to look into Fran, you might want to say, you know what? I can do that and I still have a passion. I still want to continue to grow my tent. I said I want to continue to make money, keep it going. And so you might look into franchise and you might look into some other business stuff at Mooney. You have a successful business. You know the tools to run a business. You got them, or you don’t get, and over and over again, it works over and over again. Just learned the systems or the business coach processes, learn the rules, and then just duplicate, duplicate, duplicate. As a result of delegating, delegating, delegating to create people that you hired that flew three, two, one, boom.