How Do You Keep Yourself from Being Star Struck When You Get a Chance to Meet Your Mentor? | Hummer of Love

Clay breaks down why the former Secretary of State Colin Powell was correct when he wrote, “There are no secrets to success. It is the result of preparation, hard work, and learning from failure.” 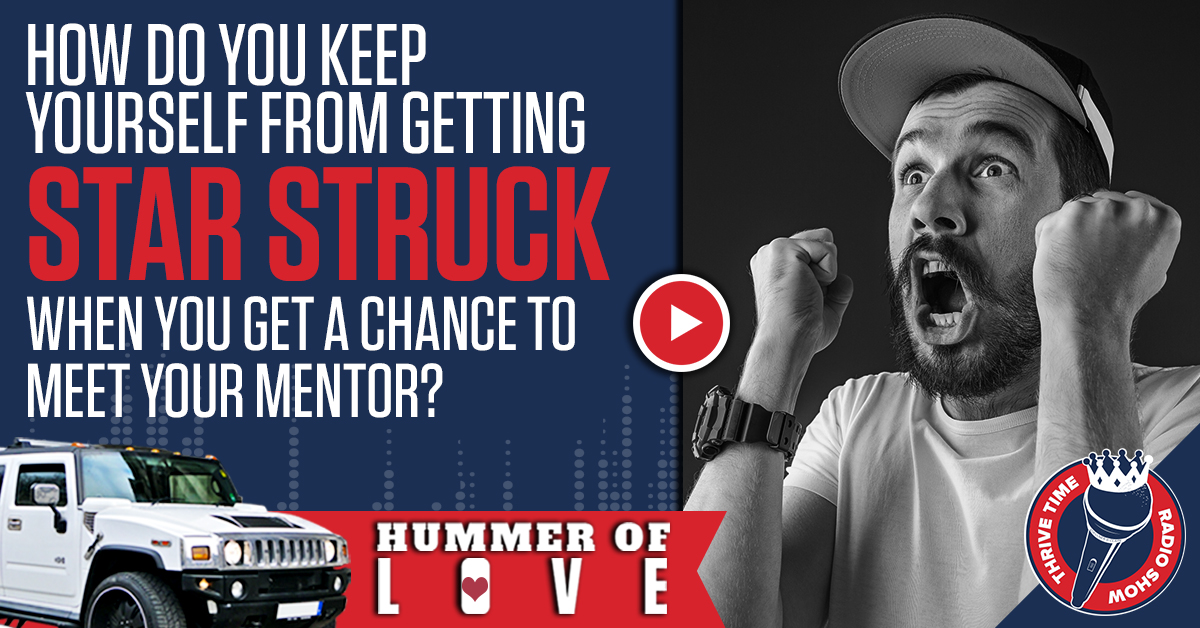 Welcome back to another Hummer of love edition of the thrive time show on your radio podcast and download where I literally answer your business-related questions while operating a wireless Bluetooth device from the insides of my H two Hummer driving to work. The official time is three 53 I’m in route to work and we have a thriver out there that once wants to know. They want to know how do you keep yourself from being starstruck when you interview a super successful person or you get a chance to meet your mentor or you get a chance to meet one of your entrepreneurial heroes? Well, I dunno if this message is going to be what you want. I’m just giving you the honest answer here. Um, I’m never not nervous. I’m always nervous. I’m always nervous. I sometimes am starstruck. I would say many times I’m starstruck when we’ve interviewed Wolfgang puck on the show, my brain almost exploded when we interviewed pastor craig groeschel.

My head almost exploded every day that I work with. The people I get to work with. My head almost explodes. I interviewed Doug Christie, former NBA player. My head exploded when, uh, uh, when I say what does that mean for head to explode? Well, I’ve just, I get so nervous. You get the, you know, the feeling where it’s like the, like the sweats going on you just a little bit of a sweat or boat kind of above the brow. You get kind of nervous, you get little blotches on your skin. Maybe you just get kind of stage fright if you will. You get that tension. Like it’s the night before a big speech you have to deliver. Maybe it’s the night before, something you don’t want to do. Maybe it’s, you’re thinking about proposing tomorrow to the girl of your dreams and you’re, you’re stressed out. Maybe you’re a woman out there and you know that, you know, uh, tomorrow you got a big job interview or you have to fire somebody.

You’re just kind of asked that, that, just, that feeling of that I feel, you know, that, that feeling of, of anxiety. Yeah. Yeah. I feel that. And it will then, then maybe the question to follow is, well, how do you get over it? Um, preparation is key to having a better conversation as relates to interviewing somebody. Um, preparation is key, just preparing, but beyond preparing just for interviews, it’s, it’s about preparation for everything. So, uh, you know, today it’s three 53 and maybe that’s the first big teaching moment is I get up at three and I am a business coach. Why do I get up at three? I’ll get up at three. So I get everything done and prepare for the show and uh, getting the questions gathered and prep the outlines. And I do it every day, you know, now I don’t have to get up at three. I, I, I could get up at a later time, but I’d prefer to go to bed at nine and wake up at three and I talked to prepare for my day.

Um, so we’ll clay, what about areas of your life you can’t prepare for those? Stress me out. That’s why vacations bother me. I don’t like going on vacation because I, there’s no plan. There’s no, you know, meet her the plan. We’re going to go to the airport at this time, but then the plan quickly changes because we’re going to be delayed almost every time. So that frustrates me a go into, uh, a beach. Uh, what’s our plan? We’re just going to enjoy the beach. I have a hard time with that and I have our time. Okay. Just enjoy the beach. So, you know, I prefer not to go on vacations. That’s why, uh, I prefer not going out to eat with most people. I say most people, pretty much everybody because there’s not really a specific plan to the conversation. So how do I get over that?

I literally will plan out the conversations that I will have when going out to eat. I do that. I literally plan out what I’ll do when I go to the beach. I’m like, okay, I’ll read this specific business coaching book for this allotted amount of time. That’s how I get over it. But any area in my life where I feel some type of trepidation, some type of a [inaudible], I just make up for it with preparation. And when you prepare, you’re gonna win. You know, the the will to win is, is absolutely completely meaningless unless you have the will to prepare. I’m paraphrasing Vince Lombardi, but the will to win is absolutely meaningless if you also don’t have an equally powerful desire and perhaps a greater desire to prepare selling franchises, the will to sell franchises, then the big idea to start the business and really doesn’t matter. It’s the will to prepare.

No matter what you want to do out there. If you’re listening today, whether you’re self employed or you work somewhere, it’s you want to win, you have to prepare. There is no other way to get there. There is no shortcut. You must prepare. So in interviewing somebody, how do I prepare for that? Well, I usually will pick up a copy of a book about that person. That’s usually step one and we’ll usually then read as much as I can about that person. I then go to their website. I like to see what they have to say about themselves. I then go to other websites to see what other people have to say about them. I then like to go to Wikipedia to say what the inter, the independent Wikipedia acts have to say about them. I then go to YouTube and watch interviews where they’ve been interviewed about various things.

Um, then I listen to some podcasts about them and five to six hours later, I have what I would call a rough outline. And then I go to bed and then I wake up at three and I edit that outline again to make sure I’m not missing anything or asking a question that’s dumb or that’s nonsensical or that a is just a waste of their time. So yesterday we interviewed Doug Christie, the former NBA player for the Sacramento Kings, the New York Knicks and other teams. Um, I felt very prepared to interview him because I had prepared my questions and therefore the interview went well. I knew about his time on the Kings. I knew about, uh, the mutual affection that he and Chris Webber had for each other. I knew about how much he enjoyed playing basketball against Bobby Jackson on a one on one basis while playing for the Kings he used always challenge him to one-on-one games.

I knew about where he went to high school and college. I knew these things because I prepared know how did I get there? I prepared. So you want to start a successful company? What do you have to do? Prepare if you want to get jacked, how do you do it? You got to prepare. You got to make your food the night before workout during the day. You’ve got to prepare. Anytime you want to get there, you must prepare. My name is clay Clark. I am a business coach. I like to end each and every show with the boom. So now that he further ado, here’s a Hummer of love edition of the book, three, two, one. Boom.